It appears that Defense Secretary James Mattis’ archenemy is not ISIS or al-Qaeda. Instead, Mattis’ biggest nemesis is National Security... 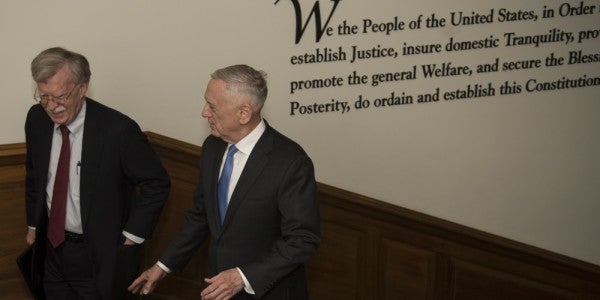 It appears that Defense Secretary James Mattis’ archenemy is not ISIS or al-Qaeda. Instead, Mattis’ biggest nemesis is National Security Adviser John Bolton – not to be confused with Michael Bolton.

Bolton and his deputy Mira Ricardel are actively spreading rumors that Mattis is on his way out, according to Foreign Policy, which cited two “well-placed” yet unnamed sources, including a former senior defense official.

Ricardel has previously denied that she is trying to undermine Mattis. She told Task & Purpose on Oct. 16, “The NSC [National Security Council] is coordinating across government agencies to implement the President’s agenda, including with the Defense Department under the leadership of General Mattis, for whom I have great respect.”

A U.S. defense official told Task & Purpose that Mattis “has a good working relationship with [Bolton] and chuckles at these kinds of stories.” Mattis himself put things more bluntly: “We all have a job to do. I do my duty and let God sort out the rest.”

Tensions between Bolton and Mattis have long been rumored. In fact, when the two met at the Pentagon in March, Mattis joked, “I heard that you’re actually the devil incarnate and I wanted to meet you.”

But Mattis’ humor does not seem to have defused the rancor between the Pentagon and National Security Council. Ricardel had tried to get a job in the Pentagon back in 2017, but Mattis blocked her, according to the Washington Post. When Bolton brought on Richardel as his deputy, it was seen as a challenge to Mattis, who had wanted former Obama administration officials to take the job, the Post reported.

Since Ricardel joined the NSC, Mattis has had to deal with a never-ending series of stories hinting that he is about to resign or the president wants to fire him. On an Oct. 14 episode of “60 Minutes,” Trump called Mattis “sort of a Democrat,” which fueled speculation of Mattis’ imminent departure.

But the day after the interview aired, Mattis told reporters he spoke to Trump, who told him, “I’m with you 100 %,” according to a pool report of the exchange.