Defense Secretary James Mattis has long been outspoken on the dangers of climate change. For him, it’s not just about... 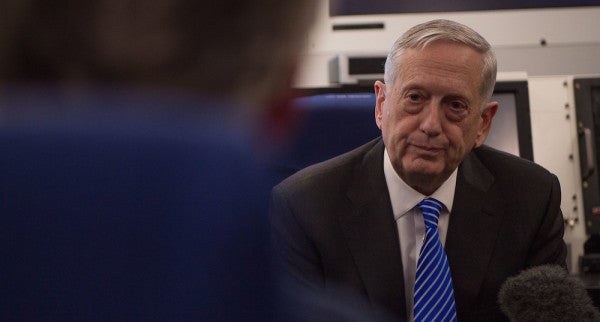 Defense Secretary James Mattis has long been outspoken on the dangers of climate change. For him, it’s not just about going green; it’s about national security.

“Climate change is impacting stability in areas of the world where our troops are operating today,” Mattis wrote in unpublished testimony, provided to senators after his confirmation hearing and reported by ProPublica Tuesday. “It is appropriate for the Combatant Commands to incorporate drivers of instability that impact the security environment in their areas into their planning.”

That testimony was part of 58 pages of written answers to “questions for the record” posed to Mattis by members of the Senate Armed Services Committee. Five questions from Democratic senators centered on the issue of climate change, and Mattis answered each one in depth.

Mattis promised to bring to light the dangers of climate change to U.S. national security interests and to work with other cabinet members to address the issue.

“Climate change is a challenge that requires a broader, whole-of government response,” he wrote. “If confirmed, I will ensure that the Department of Defense plays its appropriate role within such a response by addressing national security aspects.”

It is unclear, however, if Mattis’ view on climate change will have any influence on the White House, which has vowed to pass legislation that will scale back the Environmental Protection Agency’s powers and reverse a number of climate initiatives started under former President Barack Obama.

ProPublica asked the White House and “half a dozen” other cabinet departments historically involved in climate policy about Mattis’ comments; none gave a response on the record. A State Department spokeswoman punted the question, saying climate issues were up to the White House and its National Security Council: “We refer you to the NSC for any additional information on the climate working group.”