As President-elect Donald Trump vets individuals for his cabinet, a number of rumored candidates have emerged as frontrunners, such as... 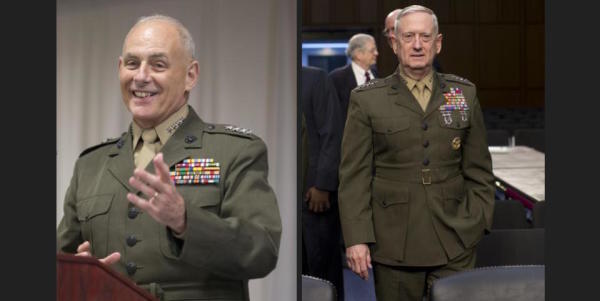 As President-elect Donald Trump vets individuals for his cabinet, a number of rumored candidates have emerged as frontrunners, such as Marine Corps Gen. James Mattis for secretary of Defense and Gen. John Kelly for secretary of State or Homeland Security.

According to The Washington Post, on Nov. 19, Trump with Mattis and then met with Kelly the following day. A source told The Washington Post that, during these meetings, they both recommended each other for the position of secretary of Defense. The pair have known each other a while, becoming friends after serving together in Iraq. While Mattis was the two-star general in charge of the 1st Marine Division in the 2003 invasion, Kelly served as his one-star assistant commander.

Related: Here’s What Mattis Actually Needs In Order To Be SecDef »

Both men have also been outspoken on issues of national security throughout the Obama administration.

Mattis spent 44 years in the Marine Corps. His career culminated in 2010 when he served as the head of U.S. Central Command, managing conflicts across the Middle East, North Africa, and Central Asia until his retirement in 2013.

Kelly led U.S. Southern Command from November 2012 until 2015 when he retired after 40 years of military service. Kelly is viewed as frank and bluntly spoken, and his combat experience and status as a gold-star parent has endeared him to the Marines he leads.

Kelly and Mattis both declined to comment on their meetings with Trump, but allegedly found the engagements to be “respectful and wide-ranging,” according to The Washington Post.