When it comes to understanding what it means to be an American, few people have a better grasp of the... 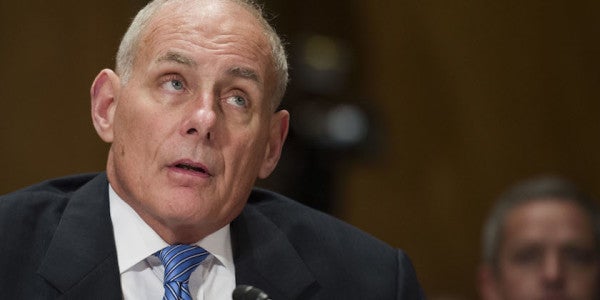 When it comes to understanding what it means to be an American, few people have a better grasp of the concept than retired Marine Gen. John F. Kelly, set to become the secretary of Homeland Security in the Trump Administration. Not only did Kelly spend more than 40 years of his life in uniform, serving in both Desert Storm and the initial invasion of Iraq alongside Gen. James F. Mattis, he’s a Gold Star father. In 2010, Kelly’s son, Robert, was killed in action as a Marine serving in Afghanistan.

Given everything we know about Kelly, it’s hard to imagine that anyone would ever feel the need to tell the retired general that he should wear an American flag pin on the lapel of his suit. But someone did just that.

On Jan 11., the day of Kelly’s confirmation hearing, Washington Post reporter Robert Costa recounted an exchange he observed between Kelly and another person, who suggested the retired general wear an American flag pin for his hearing. I think it’s safe to say his response was justified.

Scene from the Hill…
Gen. John F. Kelly wasn't wearing a flag pin.
A friend suggested he should.
Kelly said no, "I am an American flag."

It’s important to note that wearing the flag pin isn’t necessarily a time-honored American tradition. In fact, Richard Nixon may have been the first U.S. president to ever wear one. According to one of his biographers, Nixon got the idea from his chief of staff, H.R. Haldeman, who apparently got the idea from the Robert Redford film “The Candidate.”

American flag pins became popular again after the Sept. 11 terrorist attacks, when George W. Bush and his aides all began wearing them. Many Fox News anchors followed suit; though, as Time reports, Bill O’Reilly chose to keep his lapels flag-free, defending his decision to do so by saying, “I’m just a regular guy. Watch me and you’ll know what I think without wearing a pin.”

Kelly seems to think along those same lines: Patriotism isn’t a fashion statement. It’s simply a state of being, especially when we’re talking about people who’ve dedicated their lives to public service.

During the 2008 presidential election, then-senator Barack Obama faced scrutiny for not wearing a flag pin. Although he ultimately decided to wear one, Obama’s explanation for initially not doing so makes a good case for not pressuring others to take part in a Washington tradition that was inspired by a Hollywood film.