FedEx Driver, A Marine Veteran, Stops His Route To Pick Up And Fold A Fallen American Flag

A FedEx driver stopped his route on Wednesday to pick up and fold an American flag that had fallen to... 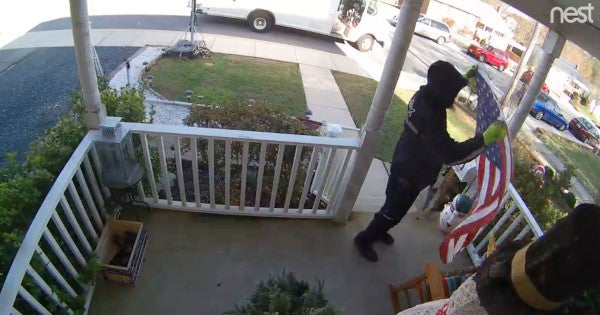 A FedEx driver stopped his route on Wednesday to pick up and fold an American flag that had fallen to the ground amid high winds — and the entire thing was picked up on a home security camera.

Gail Cook of Ferndale, Maryland spotted the random act of patriotism on her Nest home security camera. On Facebook, she wrote, “Today our flag pole broke with the high winds. The FedEx driver saw this when he was driving by and stopped. He not only picked up the flag but folded it properly and put it away safely on our porch. Thanks FedEx!!! I hope he gets the recognition he deserves, I can't thank him enough!”

In the video, a flag pole is spotted on the ground in front of the house. Then a FedEx truck turns into view and stops. Out of the truck comes Mike King, a Marine Corps veteran, who wasn't delivering a package to the house but decided to stop and pick up the flag because, he said on Facebook later, “I couldn't just drive by and do nothing.”

King not only picked up the flag from the ground but folded it and placed it on the porch.

“He did this not knowing anyone was watching — he just did it because it’s the right thing to do,” Cook told The Baltimore Sun. “And we just really appreciate that he took the time to do that for us.”

In a statement, FedEx spokeswoman Shannon Davis said, “We commend the patriotic actions of Mike King, a service provider employee who went above and beyond to properly care for a fallen American flag while on his route.”

SEE ALSO: US Customs Form Asks, 'Are You A Terrorist?' — 70-Year Old Grandpa May Get Blacklisted For Mistakenly Saying Yes