These Troops Hanging With President Trump In Iraq Are Ready To F*cking Operate, Bro

It's really not clear why but some operators made it known they were ready to fucking operate alongside President Donald... 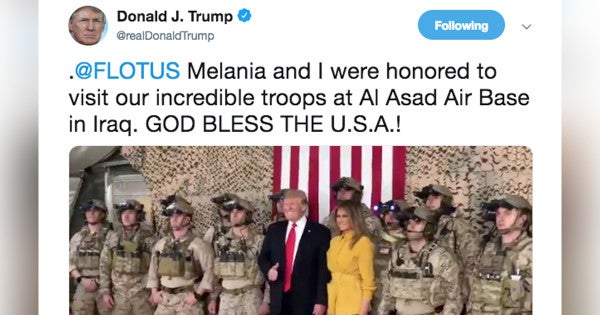 It's really not clear why but some operators made it known they were ready to fucking operate alongside President Donald Trump at Iraq's Al Asad air base on Wednesday.

The president posted a short video on Twitter of his surprise visit with the troops there, and the first part of the 90-second video features a bunch of dudes wearing chest rigs, helmets, and night vision goggles inside the very well-lit chow hall at the place most service members refer to as “Camp Cupcake.”

They're even wearing kneepads, so you could say things are getting pretty serious.

Were they preparing for the mother of all food fights, as my former colleague Dave Smith asked on Twitter? One possibility is that they put on a dog & pony demonstration for the president before or after the photo.

Obviously when the president comes to visit it's going to be a big photo op for both the White House and the troops taking selfies and such. But I'm dying to know whether them being all kitted out was their idea or Trump's.

Trump made the surprise visit to Iraq one day after Christmas along with First Lady Melania Trump.

This was the first time Trump has visited troops in an overseas war zone during his presidency.

Trump stayed in Iraq for about three hours before taking off at 10:53 p.m. local time. The White House pool report said the president had one more “scheduled stop” before he heads back to D.C., though where that was not specified.