President Donald Trump said Wednesday that he was “in no rush” to pick someone to replace Defense Secretary Jim Mattis,... 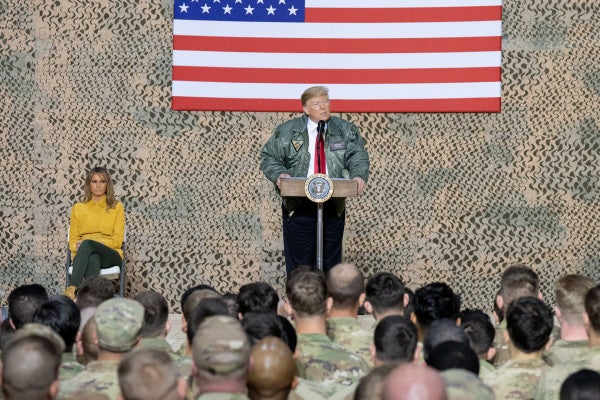 President Donald Trump said Wednesday that he was “in no rush” to pick someone to replace Defense Secretary Jim Mattis, which must be a huge disappointment to the hundreds of candidates clamoring for the job previously held by one of the most-respected generals in decades who just resigned in protest.

During his surprise visit to Iraq to shake hands and take selfies with American troops, Trump told reporters that Mattis' deputy Patrick Shanahan would do just fine running the federal government's largest bureaucracy, since he's “a good buyer.”

“Well, we have wonderful man in there now, as you know. Our friend, Shanahan, is a good man, and he's done a great job. And he's a good buyer. I wanted somebody that could buy, because I’m giving a lot of money and I don't want it to be wasted,” Trump said.

Trump went on to claim that “everybody and his uncle” wanted the position. “Everybody wants that position. Everybody. Everybody — so many people want to be — who wouldn't want to be Secretary of Defense?” he asked.

Then there's Gen. Jack Keane, who was a rumored first pick before Mattis ultimately got the nod. He doesn't seem all that thrilled about the prospect, either. Erik Prince, however, is probably available.

“So we have a lot of people,” Trump said. “We have a lot of great people who want to be Secretary of Defense. We'll take our time and we'll make the right decision.”

Whoever it is, they are sure to be in for a fun treat during their confirmation hearings.