Mouton, who deployed to Iraq four times, is currently a congressman from Massachusetts 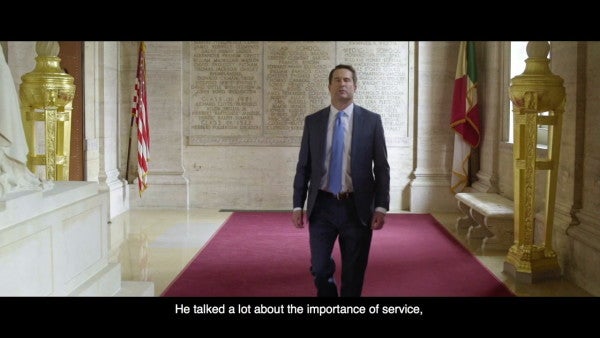 Marine veteran Rep. Seth Moulton has officially jumped into the 2020 presidential race, promising to speak extensively about patriotism, service, and national security as part of his message.

Mouton, who deployed to Iraq four times, is currently a congressman from Massachusetts. He told ABC News' George Stephanopoulos on Monday that he has long valued service to the country.

“That's why I joined the Marines,” Moulton told Stephanopoulos. “It's why I ran for Congress to try to prevent what I saw got us into Iraq from happening again, and it's why I'm running to take on the most divisive president in American history.”

Rep. @sethmoulton tells @GStephanopoulos he is running for president "because I'm a patriot, because I believe in this country." See the interview coming up this morning on @GMA. https://t.co/WZ4Hv0pAM7 pic.twitter.com/uQNaC2XJRJ

In his campaign's first official video, Moulton says he was inspired by a minister during his time at Harvard University to join the Marine Corps.

“Even in a war I disagreed with, there's nothing I'm more proud of than being a grunt, being on the ground serving with those Marines,” he says in the video. “Before I knew it, I was commanding a platoon in the first company of Marines into Baghdad.”

Later, Moulton says, he learned that the war was “based on a lie,” and decided to run for Congress because both American voters and Marines in Iraq felt betrayed by their government.

As president, Moulton's priorities would include strengthening cyber defenses to prevent Russia from interfering in U.S. elections again and cutting “massive weapons programs that we don't need.”

While speaking in February at the liberal Brookings Institution think tank in Washington, D.C., Moulton gave a preview of where he thinks defense spending can be cut, noting that for the price of a single U.S. aircraft carrier, China could build 1,238 anti-carrier cruise missiles.

“We're investing 16 times more in carriers than in cyber. We need to reexamine that balance,” he said on Feb. 12. “We need to ask the same questions of our massive financial commitment to the F-35.”

Moulton faces extensive competition from other candidates competing for the Democratic Party's nomination for president in 2020. He is the 19th Democrat to join the race; former Vice President Joe Biden is expected to throw his hat in the ring later this week.

SEE ALSO: These Congressmen Are Fighting To Clear Names Of Marines Abandoned By The Corps