WASHINGTON — A record number of female combat veterans are on the ballot in congressional races this fall, a test... 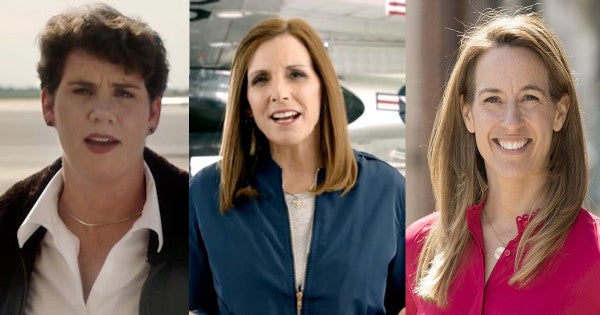 WASHINGTON — A record number of female combat veterans are on the ballot in congressional races this fall, a test of whether women can repeat the success American men have long enjoyed of by turning military experience into political careers.

The nine candidates have the potential to more than double the number of female combat veterans in Congress, the first two of whom were elected only six years ago. And while six of the nine candidates are Democrats, their success or failure could be a trial run for both parties in future elections.

“There has been this long tradition of men leveraging their military service into political service,” said Sen. Tammy Duckworth, D-Ill., who was elected to the House in 2012. “And now you’re seeing women do that. … They’re doing just what the men have done.”

The increase traces directly back to the military’s decision to open combat roles to women in 1993, when many of the current candidates were just starting their careers. A quarter-century later, those women have retired from the military and see Congress as a logical next step.

“I flew 89 combat missions in the U.S. Marine Corps and my 90th mission is running for Congress,” Amy McGrath, a retired lieutenant colonel who is running in the 6th Congressional District in Kentucky, says in a campaign ad.

The candidates also represent a part of what has become a monumental election cycle with record numbers of Democratic female candidates, many of whom say they were inspired by the 2017 Women’s March and are running to be a check on President Donald Trump.

“A lot of the things I worked so hard for as a member of the military and as a citizen … I really feel they are in jeopardy,” said Chrissy Houlahan, a Democratic retired Air Force captain who is running in a district outside Philadelphia. She said she’s driven in part by concern for people like her father, who was a refugee to the United States, and her daughter, who is gay.

Elaine Luria, who is hoping to unseat freshman Republican Rep. Scott Taylor in a Virginia Beach, Va., area district, said running for office as a continuation of the commitment she made on her first day at the U.S. Naval Academy — a sentiment many of the candidates have repeated in campaign advertising.

“I can’t sit on the sidelines in our current political climate,” she said.

Each candidate has made her military service a leading part of the biography they’ve presented to voters, with images of them in uniform on their websites and in television ads. Rep. Martha McSally, R-Ariz., — the only female Republican female veteran on the ballot in a Senate race — has used it to draw a contrast with her Democratic opponent in their contest.

“I put my life on the line for our country, I flew 325 combat hours protecting our freedoms and our way of life,” McSally said, one of several military references she made in a debate with Kyrsten Sinema this week.

And they’ve combined their military service with other issues, such as an ad in which Democrat Gina Ortiz Jones — who is hoping to unseat Rep. Will Hurd, R-Texas — spoke about her mother’s cancer while Ortiz Jones was serving in Iraq.

Many of the candidates lean on their military backgrounds to frame why they decided to run.

“I have been pretty much serving the country my entire adult life,” said Mikie Sherrill, a retired Navy lieutenant commander running in New Jersey. “To see a lot of the things I had worked so hard for, all the values that I believed in, to come under attack … I decided it was to run for office.”

Three of the candidates are Republicans. McSally’s race is neck and neck. Two other Republican candidates face an uphill battle in Democratic-leaning House districts in a year that is unlikely to trend their way: four-time candidate Wendy Rogers, an Air Force pilot seeking to unseat Democratic Rep. Tom O’Halleran in Arizona; and Aja Smith, an Air Force veteran hoping to unseat Democratic Rep. Mark Takano in California.

Six of the veterans are first-time Democratic candidates pursing House seats — half of them are predicted to win their races or are keeping the polls tight a few weeks ahead of Election Day. The six women are reshaping what has been an area of strength for the Republicans: military service.

“The incredible female veterans running for Congress have built some of the strongest campaigns in the country and have helped us to expand the House battlefield, including in districts that President Trump carried by a wide margin,” said Meredith Kelly, communications director for the Democratic Congressional Campaign Committee. “There’s no question that this is both the year of the woman and the veteran, and that’s a huge asset for Democrats.”

Veteran status helps blunt a frequent stereotype that female politicians face on the campaign trail: that they’re not tough enough to take on significant responsibility, lead others or confront opponents.

“Female candidates ran into that, but military women have that advantage where we don’t get as much question about whether we’re as tough as men,” Duckworth said. “As a woman running for office, having a military background is a real political advantage and it negates the perception that women are not as strong on defense and military issues.”

Sherrill once had a man ask her after a small event if anyone thought she wasn’t tough enough for the job, perhaps hinting at his own concern. She reminded him that she’s a former Navy pilot and a federal prosecutor. “He said, ‘Oh yeah, you’ll be fine,’” Sherrill said.

Several of the candidates have striking similarities in their biographies. Most of them are in their early 40s; three of them — Luria, McGrath and Sherrill — overlapped at the U.S. Naval Academy. Several of them are mothers — a point they made in their campaigns.

Rogers, McGrath, McSally, Sherrill and MJ Hegar, who received a Purple Heart for her service in the Air Force and is now running for a Texas seat, were all military pilots, a coincidence that Duckworth attributes to the fact that helicopter pilot was one of the first combat jobs made available to women.

The six Democratic candidates have formed an alliance. They — and with two former CIA officers who are also running for office for the first time — have the backing of the Serve America PAC, a political action committee organized by Rep. Seth Moulton, D-Mass., with the goal of electing Democratic veterans to Congress.

The nine veterans who made the ballot in November represent a small fraction of the 43 female veterans — 29 Democrats, 11 Republicans — who decided to run for office year, this election cycle according to With Honor, a super PAC that backs veterans of both parties in House races, including all six of the Democratic female veteran candidates. Others lost in primaries or dropped out of their races.

While Democrats strongly embrace the candidates now, in at least one case they have supported other candidates. McGrath criticized the Democratic Congressional Campaign Committee for touting a different Democratic candidate over her before the primary, though the group did not make a formal endorsement.

Historically, most military veteran lawmakers have been Republicans. Duckworth speculates that the increase in Democratic veterans is likely to continue, given that people in the military today have been surrounded by women in combat roles, LGBTQ soldiers and men and women who are paid equally.

“It has made the military more progressive on a lot those values, and at the same time, the older generation, the Vietnam vets, are all retiring,” Duckworth said. “I personally think the military is undergoing a major demographic shift that I think will make it far less conservative.”

Female veterans are still significantly outpaced by the number of male veterans in Congress pursuing elected office. According to the With Honor PAC, 198 veterans — including incumbents — are running in House races this fall, including 102 Republicans and 65 Democrats. The rest are third-party or write-in candidates.

There are 81 veterans currently in Congress, according to the Brookings Institution. Only four are women: Duckworth, McSally, Sen. Joni Ernst, R-Iowa, and Rep. Tulsi Gabbard, D-Hawaii.