The Army’s nascent gender-neutral Combat Readiness Test is based on the philosophy that male and female soldiers will have to... 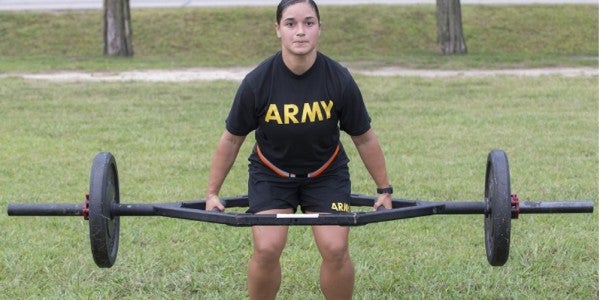 The Army’s nascent gender-neutral Combat Readiness Test is based on the philosophy that male and female soldiers will have to perform the same tasks in combat, so they should meet the same physical fitness standards, a service official told Task & Purpose.

Instead of gauging what they can do, the ACRT focuses on what the Army needs soldiers to do for their jobs, said Michael McGurk, director of research and analysis at the U.S. Army Center for Initial Military training.

Army Secretary Mark Esper told reporters on Feb. 15 that be believed the ACRT should be gender- and age-neutral. “The enemy does not specify who they’re going to shoot and not shoot,” he said.

While biology, kinesiology and other sciences have demonstrated the physiological differences between men and women, combat itself is gender-neutral, McGurk said. The ACRT is meant to be a better measure of how well male and female soldiers are ready for war.

“We’ve not been testing in all the areas and skills that soldiers need on the battlefield with our current PT test,” McGurk said.

“While we don’t foresee any changes as we go forward, we’re open if there’s a better idea or a more applicable event if someone shows us: ‘Hey, it would be better if we did it this way or changed this,’” McGurk said. “We’ve been working on this for over three years and we feel we’re pretty close to what right looks like. It’s never absolutely perfect, but we think we have a pretty good product.”

The gender-neutral scores and standards will likely be set after the ACRT has gone through a trial period with select Army units, he said. It is not yet known when that might take place, or if Army leadership may decide to adopt another physical fitness test.

“We need to match the minimum standards of the test to the minimum standards required for combat operations, and then we want the scale to be aspirational from there,” McGurk said. “Anyone who’s been around our military a day or two knows that we’re not really happy with minimum scores on most things.”

Soldiers who score a minimum of 180 points on the current physical fitness test are not likely to be promoted ahead of their peers, McGurk said. Likewise it “would not be career-enhancing” for soldiers to meet the minimum scores on the ACRT’s six proposed events, he said.

The ACRT is part of a wider Army’s “Holistic Health and Fitness” efforts to revamp physical fitness for all soldiers, he said. The service plans to increase the number of coaches and trainers to prevent soldiers from being injured and ensure they heal quicker when they do hurt themselves while exercising.

After 17 years of war, the Army’s overall fitness level is “at least satisfactory,” he said.

“Satisfactory is not a level that we would think is good enough moving forward,” McGurk said. “We want the fitness level to be excellent for everybody – and it’s not there right now, but we certainly can get it there.”