The Army’s New Combat Fitness Test Will Kick Your Ass

By October 2020, all soldiers will be required to take and pass the Army’s new gender- and age-neutral Combat Fitness... 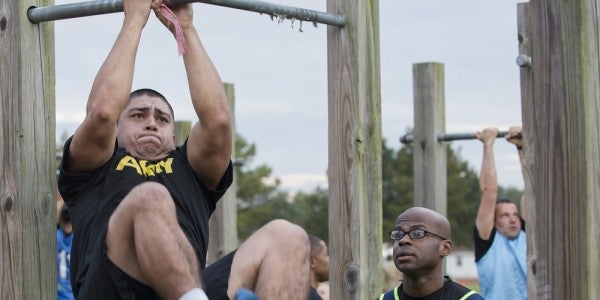 By October 2020, all soldiers will be required to take and pass the Army’s new gender- and age-neutral Combat Fitness Test, which has more events and less time for rest than the service’s current PT test, officials said on Monday.

The Army has not yet decided what the standards will be that soldiers have to meet on each of the test’s six events, or whether soldiers will take alternative tests if they fail any or all of the events, said Sergeant Major of the Army Daniel Dailey.

“We don’t need to rush into this — and we’re not going to,” Dailey said. “The chief of staff and the secretary have been very adamant about the fact that we’re going to take a year to study this inside of our organizations.”

The new test will involve six events that will be completed in 50 minutes or less, said Maj. Gen. Malcolm Frost, head of the Army Center for Initial Military Training. The current physical fitness test has three events.

Soldiers will start with a strength deadlift, which they will have to complete three times, Frost said at a media roundtable. Then soldiers will throw a medicine ball as far as they can over their head.

Next, soldiers will have to do a set of pushups, during which they lift their hands off the ground after completing each pushup, he said.

Then soldiers will hang perpendicular to a pullup bar and bring their knees or thighs up to their elbows, Frost said. The final event is the 2-mile run.

The Army will put the new combat readiness test through a trial period before the service adopts it as the new PT test of record, Frost said.

Related: How You Too Can Sham Your Way Through The Army Combat Readiness Test »

Starting in October, 60 battalions across the Army will spend a year training for and taking the combat fitness test, providing data that will help the Army develop standards for each of the test based on a soldier’s unit and Military Occupational Specialty, he said.

“Occupational standards that have a higher physical demand are going to be looked at with more scrutiny as to a higher standard because that’s what your occupation as a soldier demands for you in combat,” Frost said.

All soldiers will begin training for the combat fitness test starting in October 2019, after which the Army secretary and chief of staff have up to a year to determine when it will replace the current physical fitness test, he said.

Both Frost and Dailey have taken the test, and they found areas where they needed to improve. Frost said he needed to work most on the backwards 90-pound sled drag.

“I didn’t do as well on the deadlift because I don’t do it — I just don’t do deadlifts,” Dailey said. “Now I have to train for it, just like every other soldier in the Army is going to have to do those things.”

CORRECTION: An earlier version of this story incorrectly referred to the PT test as the Army Combat Readiness Test.