Here’s How Marines Fared On The New Physical Fitness Test

This year, the Marine Corps set out to make Marines stronger, faster and generally more fit by raising the service’s... 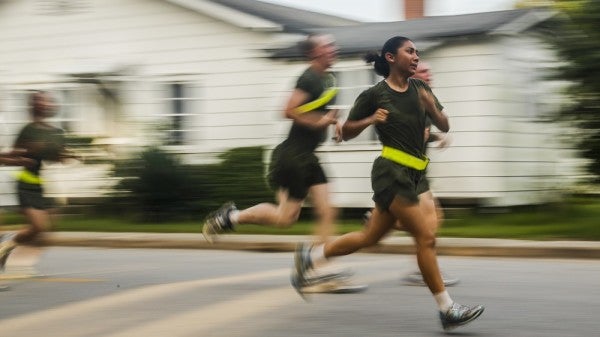 This year, the Marine Corps set out to make Marines stronger, faster and generally more fit by raising the service’s physical fitness test standards, and it appears that they succeeded.

After the official launch of an enhanced physical fitness test in January, the percentage of first-class physical fitness test scores declined for the first time in years, while second, third-class, and failing scores increased, and average PFT scores dropped for the youngest male and female Marines, and increased or held steady for the oldest Marines, based on an analysis of 2017 fitness test scores provided to Task & Purpose through a Freedom of Information Act request. Though top-tier scores may be on the decline, individual event scores (number of pull-ups, crunches, and run times) all increased or remained about the same, which indicates that Marine fitness remains high.

In the past, roughly 90% of Marines scored a first-class on the PFT, but by raising the requirements for a top score, the service curbed the percent of first class PFTs. In 2017, only 71.2% of Marines received top marks on the new PFT, with 19.2% getting a second-class, and 6.7% scoring in the third tier, and the remaining 2.9% failing.

“So what this means is that first-class has become more meaningful,” Brian McGuire, the deputy director of the Force Fitness Division and one of the architects of the PFT overhaul, told Task & Purpose. “One of the brightest stars in the constellation of developing a test is that you want to be able to distinguish between levels of fitness: high-fit, mid-fit, low-fit, etc. That’s what this has done: given us the ability to better distinguish between different levels of fitness.”

As part of Marine Corps Commandant Gen. Robert Neller’s overhaul of the service’s fitness program, the PFT underwent a number of major changes, including tougher requirements for individual events, a sliding point scale based on age, the addition of pull-ups for female Marines, new requirements for a top score, and alternative exercise options, like push-ups and rowing.

The changes were announced following a series of townhall visits by the commandant to Marine Corps installations in the fall of 2015, during which Marines consistently said the PFT and CFT needed to be scored differently.

“The events weren’t too easy, but the scoring was too easy,” McGuire added.

The 2017 data set provided to T&P; was drawn from 199,637 Marines who ran the physical fitness test this year. To accurately gauge changes in fitness scores, the most recent data set was divided into the same age brackets as the previous four years — the new PFT divides Marines along four-year age groups — with the change in scoring for different ages taken into account in the 2017 data set. Many of the key findings for the full 2017 PFT season line up with earlier analysis provided by Task & Purpose in June, and again in July.

One of the reasons for the decrease in first-class scores overall is the hike in point requirements, which was raised from 225 to 235 in 2017. The PFT averages for the youngest age group of female Marines, 17-26, was 233 — just two points shy of the first-class cut-off — compared to male Marines of the same age, who averaged 238, McGuire said.

However, the dip in first-class PFTs doesn’t mean that Marines are less fit. On average, Marines are knocking out more crunches — since the requirement was raised — more trips over the pull-up bar, and run times are holding steady overall — though the youngest Marines, 17-26, achieved slightly slower run times this year than the year prior.

Additionally, the drop in first-class PFTs won’t severely impact promotions, McGuire said. Among E-3s and E-4s, it’s a Marine’s PFT score (in addition to combat fitness test and rifle range scores), not their class, that counts toward promotions, so a two-point drop for female Marines is “negligible,” McGuire said.

“There’s really not that much of a difference,” McGuire said. “This was something where we did want to incentivize fitness and we did want to distinguish between different levels of fitness in Marines, but we did not want to cause any deleterious effects to promotion.”

Other major changes to the PFT included the addition of pull-ups for women and the option for all Marines to swap push-ups for trips over the bar. In 2016, female Marines had the option to do pull-ups over flexed arm-hangs, though just under 2,000 elected to do so. By 2017, the number ballooned to roughly 9,500, with female Marines averaging eight trips over the bar.

“As far as the pull-ups go, I’ve been training for it beforehand, so I was pretty prepared for that part,” Sgt. Kesz Wesley, a water support technician told Task & Purpose in June. “I know a lot of females that were stoked about doing pull-ups because they feel like we have a lot to prove. I might only have to do nine, but I’ll still do 15.”

In 2017, 35% of female Marines, and just 5% of male Marines elected to do push-ups, but opting for the exercise comes with a catch — the max score is just 70 points, rather than the 100 possible for pull-ups, making the decision to go for the alternate exercise a bit of a wash.

“The max reps for push-ups was challenging for each of those age groups. We expected that,” McGuire said. The sentiment was mirrored by Marines who spoke with Task & Purpose in mid June.

“If you can’t do pull-ups, chances are you won’t do well in push-ups,” Staff Sgt. Charles Frangis, an infantry platoon sergeant, told Task & Purpose previously.

“Nobody does the push-ups,” Sgt. Gunnar Naughton, a 24-year-old chemical, biological, radiological, and nuclear specialist, told Task & Purpose in June. “The only reason why it would be good for you to do the push-ups would be if you did less than 15 pull-ups, but could do 70 push-ups.”

Though the dip in first-class scores is significant, it follows past trends. When the Marine Corps introduced the three-mile run for female Marines and stricter requirements for pull-ups in 1996, top scores took a similar dive. Then they rebounded, and that’s what the service thinks will happen this time.

We did see a precipitous drop in the PFT scores, but over the years they gradually went back up and we’re expecting the same sort of thing to happen here,” according to McGuire.