As part of the Marine Corps’ fitness overhaul, the service created the High Intensity Tactical Training program, a brutal workout... 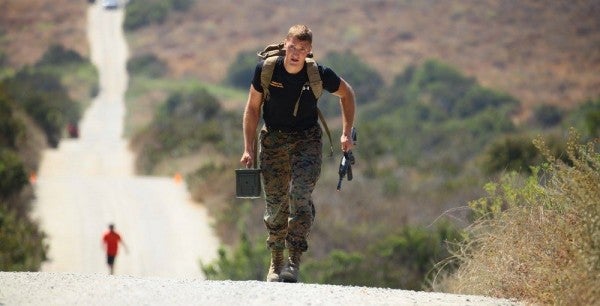 As part of the Marine Corps’ fitness overhaul, the service created the High Intensity Tactical Training program, a brutal workout regimen designed to build Marines’ combat fitness while minimizing injury. And with it, the Corps rolled out the Ultimate Tactical Athlete competition in 2015, which brings together top-tier male and female Marine athletes from across the Corps for a multi-day endurance and strength competition. Think of it like Ninja Warrior, but with more MARPAT and with some actual tactical relevance.

The winner of this year’s competition, Sgt. Ethan Mawhinney, an air-ground task force planner with Marine Corps Forces Special Operations Command, nabbed the first place title for the second year in a row.

But the Marine didn’t get to the top by luck, according to a Department of Defense news release. When Mawhinney first took part in the annual competition in 2015, he placed sixth. Unsatisfied with the results, he got to work, slamming out multiple daily workouts and coming in first place in 2016. While his performance improved, the brutal workout regimen was leading to injuries, and Mawhinney made some important changes to his routine for this year’s competition.

Switching from several training sessions to just one marathon workout each day, Mawhinney starts with a specific routine of pull-ups to box jumps, reports Marine Corps Times. Once his blood’s flowing, he switches it up, focusing on a wide range of different exercises, from weight training, to aerobic exercises and calisthenics, sticking to the same format with each workout but never duplicating the same exercises.

For this year’s Ultimate Tactical Athlete competition, Mawhinney decided to focus on exercises that emphasized explosive strength, “little things like short, 15-yard sprints, for training take-off speed,” he said. “There wasn’t any one thing that I thought I really wanted to work on. I just want to get better at everything for next year.”

The annual competition involves five events, from running, lifting, and a hill climb to maneuvering under fire and an amphibious tactical event. It’s designed to test a competitor on the key parts of the Corps HITT program, which emphasizes squat, press, lunge, plank, rotate, pull and push for an all-around workout.

And because the scoring for the competition was based on time, Mawhinney needed speed and endurance. His daily workout involves box jumps, modified push-ups, Olympic-style lifting, and stamina training.

Despite successfully defending his title, Mawhinney stresses that winning a competition like Ultimate Tactical Athlete is just a means to an end: becoming the best possible warfighter he can be. “I’ve heard it said that we should work out for two reasons,” he says, “to make ourselves better at killing the enemy and to make ourselves harder for the enemy to kill.”