Marine Veteran, Amputee Athlete Kirstie Ennis Gets The Keys To A Custom-Made Home

Five years after miraculously surviving a helicopter crash in Afghanistan, becoming a renowned athlete, gracing the cover of ESPN magazine,... 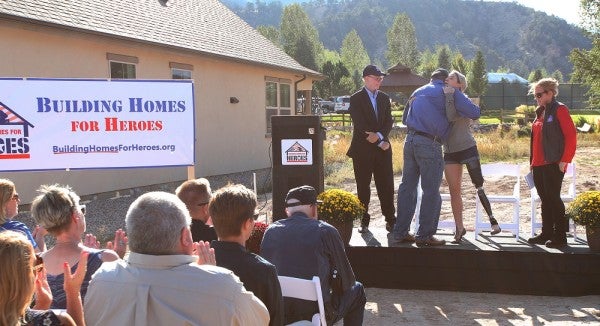 Five years after miraculously surviving a helicopter crash in Afghanistan, becoming a renowned athlete, gracing the cover of ESPN magazine, and drumming up support for her fellow wounded warriors, Marine Corps veteran Kirstie Ennis got a personal boost Sept. 16, when she was given the keys to a custom-built home in Glenwood Springs, Colorado.

“That area has everything that someone like me would be interested in: mountaineering, hunting, kayaking, and snowboarding,” Ennis told Task & Purpose. “There’s a lot of financial stability of having this home will set me up for the rest of my life, by providing the framework to have the career I want, but also be able to build off of that and do the extra things, like having a family.”

The three bedroom home was gifted to Ennis by Building Homes For Heroes, a nonprofit that receives donated homes from Chase Bank and renovates them for injured veterans in need — or, when it’s cheaper, builds a home from the ground-up. Building Homes for Heroes gifts roughly 30 mortgage-free homes each year to wounded post-9/11 veterans.

“We want to give people the opportunity to put down roots and raise their families there. That’s the number one most important thing,” Vesey told Task & Purpose, adding that the nonprofit receives thousands of applications every year. “We don’t have the means to help everyone. I wish we did.”

For Ennis, who saw her home for the first time this weekend, it’s been a long road getting there.

Ennis suffered a traumatic brain injury that resulted in memory loss, as well as severe damage to her face, spine, shoulders, and left leg. She underwent numerous surgeries, including having her left leg amputated above the knee in November 2015.

An indefatigable athlete, she’s since become a top snowboarder and is training for the 2018 paralympics, an accomplished mountaineer — she summited Kilimanjaro in April —  Ennis has run numerous marathons, and Ironman competitions, and became the first veteran to land the cover of ESPN’s Body Issue in July.

But it can be easy to lose sight of the day-to-day difficulties she still faces as an amputee.

“It cracks me up, because people will look at prosthetic limbs and think, ‘Oh, robot leg, so this makes up for the loss of limb,’ and that’s not the case,” Ennis told Task & Purpose by phone as she rolled around in her wheelchair. “There’s nothing easy about walking, even. Something as small as that, we all take for granted, it’s totally different now. Putting one foot in front of the other is a process.”

Which is why the new home is such a gift, and it’s worth isn’t easily measured.

“One of the things people misunderstand about veterans going through recovery is that they want pity — but all they want is opportunity,” Ennis said. “These homes are providing exactly that: opportunity.”

CORRECTION: An earlier version of this article incorrectly stated that Kirstie Ennis is a paralympic athlete. She is training for the 2018 U.S. paralympic snowboarding team. (Updated 9/18/17, 11:45 a.m. EST).