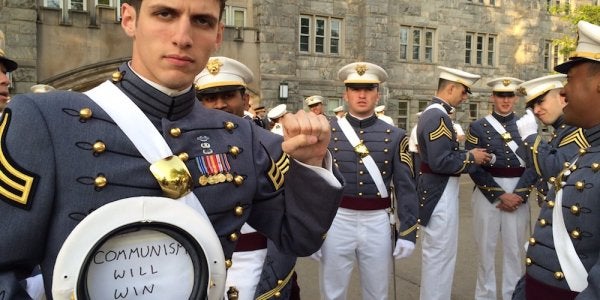 In an Oct. 11 letter to the members of the USMA community, Caslen stated that 2nd Lt. Spenser Rapone — the Afghanistan combat infantry veteran and West Point grad captured with a Che Guevara shirt under his dress uniform and a “Communism Will Win” sign under his cover — is currently subject to two ongoing investigations by both West Point and his commanders with the 10th Mountain Division for what Army Times characterized as “subversive political views.”

“It is my duty to thoroughly investigate concerns pertaining to the effectiveness of our systems and processes to maintain the outstanding quality of USMA graduates that the Nation expects,” Caslen wrote. “I am committed to fulfilling that duty to both our graduates and the American people. It is imperative that this be done right.”

The photos sparked ire not just towards Rapone but West Point officials for allowing a candidate who openly expressed controversial political views to complete his course and take an Army commission. In 2015, Lt. Col. Robert Heffington, then a West Point instructor, allegedly reported Rapone to his chain of command for insubordination and for publishing statements on social media like “f*ck this country and its false freedom.”

“It is extremely concerning that someone who so often expressed such hostile views towards the United States’ system of government was able to obtain a commission,” Sen. Marco Rubio, a Republican from Florida, wrote in a furious letter to acting Secretary of the Army Ryan McCarthy on Oct. 4. “(His) revolutionary ideas were harbored long before he was commissioned as an Army second lieutenant. Were West Point administrators or faculty aware of his views and behavior?”

The latest broadside against West Point leadership came from Heffington himself, in an open letter to West Point grads published on. Oct. 20.

“I personally witnessed a series of fundamental changes at West Point that have eroded it to the point where I question whether the institution should even remain open,” Heffington wrote. “The recent coverage of 2LT Spenser Rapone — an avowed Communist and sworn enemy of the United States — dramatically highlighted this disturbing trend.”

“Every fall, the Superintendent addresses the staff and faculty and lies,” he added. “It is disheartening when the institution’s most senior leader openly lies to his own faculty — and they all know it. The cadet honor code has become a laughingstock.”

“I do not take these allegations lightly and will provide you a response with facts addressing his allegations,” Caslen wrote. “Then you can judge for yourself whether our graduates are serving our Nation with the character imbued with the values of Duty, Honor and Country, or not. “

In the meantime, Caslen begged outraged service members and veterans to keep West Point’s legacy in mind, despite their concerns over the Rapone saga and their desire to air their dirty laundry, as Heffington did.

“I ask that you help me prevent the negativity associated with the alleged behavior of one graduate from causing us to lose sight of the thousands of graduate who sacrifice and serve honorably every day,” he wrote.

You can read Caslen’s full letter below:

Superintendent's Letter to Graduates Regarding 2nd Lt. Rapone by Jared Keller on Scribd