"If they are truly passionate about it, if they work hard and if they have that drive to excel, then anybody is capable of doing anything." 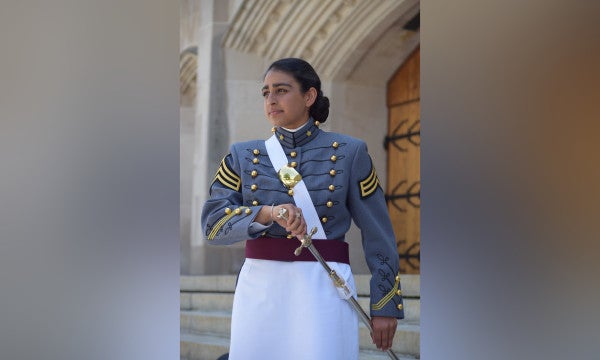 A second-generation Indian-American from the Atlanta suburbs will make history on Saturday by becoming the first openly-observant Sikh woman to graduate from the U.S. Military Academy at West Point.

For 2nd Lt. Anmol Narang, Saturday’s ceremony marks the culmination of a lifelong desire to serve her country, one which was inspired by her family’s wartime service in India in the 1960s and 70s.

“My grandfather was an armor officer in the Indian army, so I grew up hearing about tanks and his recollection of fighting in the mountains of northern India,” Narang told Task & Purpose. “Everything he told me grew my interest in the military … he embedded that culture of service and giving back to your country.”

Narang knew she wanted to serve in the military, but she also wanted to go to college and get an education. Her parents, who moved to the United States in the 1990s, did not know she could do both at West Point, she said. Luckily a friend on the high school tennis team told her about the academy and that sparked Narang’s interest in applying.

That spark grew into a fire when Narang visited the Pearl Harbor National Memorial in Hawai’i.

“Seeing the sacrifice those people made and the results of that sacrifice was really impactful,” Narang said. “I stayed until it closed, then worked on my application when I got back to my hotel room.”

Related: The long, distinguished history of Sikhs at war

Narang’s commitment to serve her country is made even more significant by the fact that many of her fellow Americans either don’t know what Sikhism is or assume that its practitioners are terrorists. Ever since 9/11, Sikh Americans have been targeted by hate violence and discrimination, often because many of their countrymen mistakenly associate the turbans traditionally worn by Sikh men with Islamic terrorism. In fact, the first person killed in a post-9/11 hate crime was a Sikh gas station owner in Mesa, Arizona named Balbir Singh Sodhi, the Sikh Coalition, an advocacy group for Sikh Americans told Task & Purpose.

Narang was only four years old when 9/11 happened, but she and her cousins still deal with the prejudice that sprung from it.

“Personally, I can’t tell you how often I experienced the impact of racism growing up,” she said. “My cousins wore turbans and they’d be asked many times if there was a bomb in their turban, and being close with them impacted me.”

But none of that ignorance or hate dissuaded Narang from achieving her goal.

“Nothing stood in my way of wanting to serve or come here,” she said. “It’s something I never really thought about.”

Instead, when she got to West Point, Narang was confronted with a challenge that her grandfather never had to face: how to be Sikh when you’re the only Sikh around.

“I think the hardest change for me, especially in regards to my religion when I came here, was being displaced from my family and anyone else who practiced Sikhism,” she said. “That was a big change, not having that community to see on a day-to-day basis.”

Back in Atlanta, Narang and her family went to a gurdwara to pray every Sunday. But alone in upstate New York, Narang had to form her own one-person community. Luckily, her family had her back, and they sent her letters which helped Narang through the first difficult weeks of basic training and beyond.

Narang soon learned to carve out her own routine for prayers, which in turn helped her get through the challenges of a military education.

“Growing up, academics came easily, but here they became a challenge because of all the things I balance throughout the day in terms of military and physical training,” Narang said. “I did prayers as a release from daily stressors, so I learned to rely on them more than I had before.”

All her hard work and prayers paid off. Narang now gets to be the first openly-observant Sikh woman to toss her hat on the Plain alongside her 1,112 fellow cadets on Saturday — and 2020 is an auspicious year for her to do so, since it marks four decades since the first class of women graduated from West Point in 1980.

The Sikh Coalition told Task & Purpose that other women who identify as Sikh may have graduated from West Point in the past who may not have practiced Sikhism as openly as Narang has. In addition to her prayers, Narang also observed kesh (unshorn hair), though she did not require a religious accommodation from the Army because she could tie it up into a regulation-adherent bun.

While Narang will miss the close friends she’s made over the past four years, she is also looking forward to serving as an air defense artillery officer. A nuclear engineering major, Narang said she will work closely with the Air Force to deter the missile capabilities of America’s adversaries. And while Narang is the first Sikh woman to graduate West Point, there are plenty of other Sikhs to welcome her as a sister-in-arms.

“I am immensely proud of 2LT Narang for seeing her goal through and, in doing so, breaking a barrier for any Sikh American who wishes to serve,” said Capt. Simratpal Singh, a 2010 West Point graduate, in a Sikh Coalition press release.

“The broader acceptance of Sikh service members among all of the service branches, as well as in top tier leadership spaces like West Point, will continue to benefit not just the rights of religious minority individuals, but the strength and diversity of the U.S. military,” he added.

With role models like Singh and Narang to look up to, there may be more Sikh Americans to follow in their footsteps — and Narang had a few words of advice for them.

“If they are truly passionate about it, if they work hard and if they have that drive to excel, then anybody is capable of doing anything,” she said. “Especially here at West Point.”