A 20-year-old native of Fairfax, Virginia, has just been selected to serve as the West Point Corps of Cadets’ brigade... 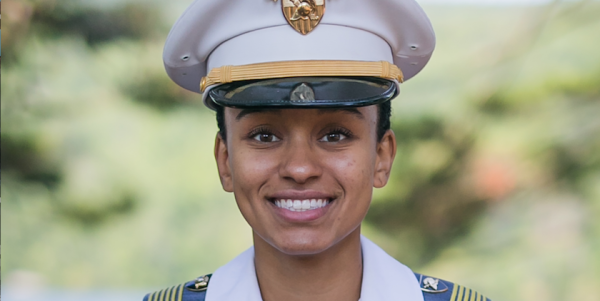 A 20-year-old native of Fairfax, Virginia, has just been selected to serve as the West Point Corps of Cadets’ brigade commander — or “first captain” — making her the first African-American woman to hold the highest student position in the United States Military Academy’s 215-year history, according to the Army.

Cadet Simone Askew assumed her duties as first captain for the 2017-2018 academic year on Aug. 14, making her accountable for the overall performance of the academy’s 4,400 cadets. In addition to setting the class agenda, Askew will act as a liaison between the Corps of Cadets and the school’s military administration.

“Simone truly exemplifies our values of Duty, Honor, Country,” Brig. Gen. Steven W. Gilland, commandant of cadets, said in a statement earlier this month. “I know Simone and the rest of our incredibly talented leaders within the Class of 2018 will provide exceptional leadership to the Corps of Cadets in the upcoming academic year.”

Founded in 1802, the U.S. Military Academy at West Point trains and educates students to become commissioned officers in the Army and has been the launching point for some of the most illustrious careers in military history.

As The New York Times notes, appointment to the first captain position is often a herald of future success. Former first captains include Gen. Vincent K. Brooks, who currently commands U.S. forces in South Korea, as well as Gen. John W. Nicholson, the senior American and NATO commander in Afghanistan.

Askew’s appointment to first captain is the culmination of years of hard work, perseverance, and leadership skills development. In high school, she helmed the volleyball team, served as the school president, and started the school’s Black Student Union. As The New York Times reports, she skipped her crowning as homecoming queen to attend a West Point recruiting event.

“Some cadets that are really high performing, they just go about their own business,” Col. Diane Ryan of the department of behavioral sciences and leadership at West Point told The New York Times. “[Askew] is just a leader in every sense of the word, figuring out how she can connect people together and serve others.”

Askew, an international history major, is now the fourth woman to earn the first captain position since 1976, when West Point first opened its doors to women; they now account for approximately 20% of cadets. That’s a relatively low number, given the fact that more women than men have been enrolling in colleges across the United States in recent years, according to theBoston Globe.

African-American women in particular are especially underrepresented at the academy — which, according to The New York Times, has yet to see more than 20 graduate in a single class. Pat Walter Locke, the first African-American woman to graduate from West Point, told The Times that she never thought she’d see a female first captain in her lifetime.

“Simone looks like America,” said Locke, who retired as an Army air defense artillery major in 1995. “Everybody can see themselves in Simone. This is such a historic moment.”