Should The Muslim Cadet At The Citadel Be Allowed To Wear A Hijab? 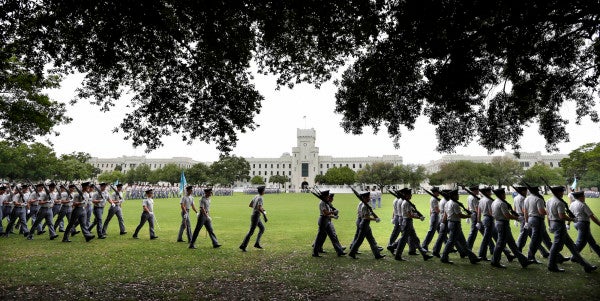 The slow-to-change, famed South Carolina military academy, The Citadel, is considering allowing a recently admitted female Muslim student to wear a headscarf, or hijab. Current students and alumni are taking their outrage to Twitter in response to this consideration — not solely because the the request for religious accommodation would be a deviation from the strict uniform guidelines, but out of bigotry against an expression of devout Islam.

The Citadel only started admitting women in 1995 and remains 93% male (worse than the service academies) — so any female cadet is exceptional in attendance alone, let alone one of a religious minority in a region not known for embracing multiculturalism.

Although the Citadel does not currently have students who have requested religious accommodation for their uniform, the school’s policy specifically states, “The Citadel will approve requests for accommodation of religious practices unless accommodation will have an adverse impact on a competing institutional interest including, but not limited to, cohesion, morale, good order and discipline, cadet welfare, safety and/or health.”

It seems like the hijab would only be detrimental to good order and discipline and unit cohesion if it turns out the Corps of Cadets cannot learn to accept a classmate who is different from them. A request by a Jewish student to wear a yarmulke would now likely be met by a shrug and not be news — because that fight happened 30 years ago. While the Citadel is a private college not affiliated with the U.S. military, many cadets are affiliated with a ROTC program, and 30% of all students receive a military commission at graduation.

One should not go to college or join the military if the desire is to be comfortable. While our leadership is still relatively homogenous, one of the occupational hazards of military service is being surrounded by people from different socioeconomic and ethnic backgrounds, especially at the junior enlisted and officer ranks. Cognitive diversity makes us stronger.

For precedent, the Citadel could look to U.S law and Department of Defense policies. In 1988, the National Defense Authorization bill passed by Congress and signed by President Ronald Reagan allowed service members to wear “neat and conservative” religious apparel while in uniform. Determination of what constitutes “neat and conservative” remains up to the individual services, and must be reviewed by a service member’s chain of command.

Religious apparel might include jewelry worn out of sight beneath the uniform, but also headgear from various faiths. The Navy’s policy specifically states that religious headgear is permitted so long as it is black or hair-colored, can be completely covered by standard military headgear, and does not interfere with proper wear or functioning of protective clothing or equipment. The Army has now permitted a Sikh officer to wear a traditional turban and a beard “While assigned or performing non-hazardous duties … that presents a professional and well-groomed appearance.”

Some may find it easy to say that those seeking a religious accommodation for their uniform should just get with the program and conform to existing — after all, it’s called a uniform for a reason, right? First, we already allow visible individualism in uniform: all branches allow enlisted service members to have visible tattoos.

Second, this callous attitude toward religious apparel reflects a lack of understanding of what it means to both be a member of a religious minority, and how fundamental to one’s identity wearing the hijab, turban, or yarmulke can be. It becomes part of you; if you are someone who has worn one of these articles your entire life, being forced to go without it can be devastating and even violating. Capt. Simratpal Singh, the Sikh Army captain who was permitted to wear a turban and beard, said that when he was forced to shave at West Point, “My life was shattered in only 10 minutes.” This lack of religious accommodation truly may keep members of ethnic and religious minorities who are part of the fundamental fabric of American culture from serving.

Furthermore, there is widespread precedent for American women wearing the hijab while in uniform — members of the female engagement and cultural support teams in Iraq and Afghanistan were required to do so in order to engage with the local population — and this was hazardous duty requiring the wear of protective gear.

The Citadel would be a stronger institution to have a Muslim woman as part of its student body, especially one who is empowered to choose to wear the hijab. As attending college is not a particularly hazardous duty, there is no reason the student cannot be permitted to wear a headscarf that is of a proper color and appearance to match the rest of her uniform.