In 1675, Tegh Bahadur, the ninth spiritual master of the Sikhs and a brilliant military leader, was actively pushing back... 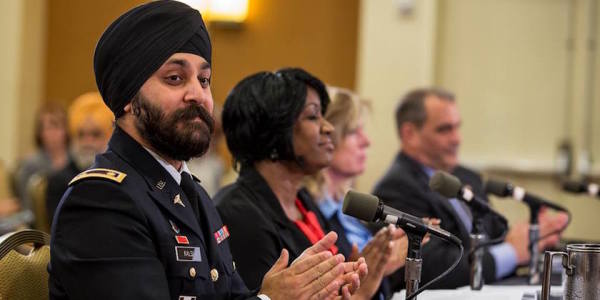 In 1675, Tegh Bahadur, the ninth spiritual master of the Sikhs and a brilliant military leader, was actively pushing back against the Mughal empire’s intolerant policies of forced religious conversion. After Hindus from the Kashmir region implored him for help, Tegh Bahadur sent the Moghul emperor, Aurangzeb, a challenge: “If you can convert me to Islam, then all of the Hindus in Kashmir will also convert to Islam. But if you can not convert me, then you must let them practice their religion in peace.”

The Mughals tortured Tegh Bahadur’s followers and killed them in order to compel him to convert. Ultimately, they beheaded Tegh Bahadur when he refused to give up his Sikh identity, and with that sacrifice the Kashmiri Hindus were spared forced religious conversion.

This is a story that Sikh children grow up listening to. It teaches us lessons of sacrifice, bravery, and social justice. It taught me to stand up for the practice of all religions.

Ever since 9/11, Sikhs, Muslims and other minorities that appear “Middle Eastern” have been targeted in hate crimes, workplace discrimination, and bullying. As a Sikh, I fought back against that hate and intolerance by working to fix discriminatory policies that institutionalize these divides. If one of the largest employers in the United States, our military, can discriminate against my religiously mandated turban and beard, then that gives cover to every employer to do the same.

Sikhs served honorably in the U.S. military for most of the 20th century, but in the early 1980s the military changed grooming and uniform regulations, essentially barring all Sikhs with turbans and beards from service. But it wasn’t just Sikhs who were pushed out. Muslims, Native Americans, Rastafarians, some Jewish sects, and several other religious minorities were also told that their religious observances would no longer be allowed in uniform.

Related: A Marine Says Her Religion Exempted Her From Certain Rules. Here’s Why She’s Wrong »

In 2009, I became the first Sikh in a generation to be granted a religious accommodation for my turban and beard by the Pentagon, and on Jan. 3, 2017, the Pentagon released Army Directive 2017-03. It is a policy that addresses the most commonly requested religious accommodations and is a monumental achievement for not only Army Sec. Eric Fanning but also for those Sikhs who had pushed this issue for nearly a decade.

It is also a victory for America. We show our strength when we recognize the civil rights of small minorities. And when we do, we also gain in our fight with our enemies. ISIS tolerates no dissent, no disagreement, no difference. Our acceptance brings new people to our side, just as ISIS’ intolerance pushes many away.

The new directive allows brigade-level accommodation approval; that is, religious accommodations will no longer clutter desks at the office of the deputy chief of staff for personnel at the Pentagon. Once the religious accommodations have been made, they will continue throughout the soldiers’ careers. They can not be revoked or modified unless authorized by the service secretary or his/her designee. These soldiers can change duty stations and deploy, all without having to reapply for their religious waivers.

The directive also sets forth changes to AR 670-1 that specifically establish guidelines for the wear of turban, beard and hijabs in uniform. And just in case I wanted to wear my pink turban in uniform, the policy change states that the turban and hijab must be of subdued color or pattern that matches the camouflage of the uniform. All soldiers must still be able to wear a helmet and other “protective headgear.” Personally, I have never had any issue establishing a seal with a protective mask even with my turban and beard. The directive acknowledges that there are powered protective mask systems that our military currently uses which will form a good seal for all soldiers with facial hair. Furthermore, the Army will look to acquire and develop more protective masks that will function with facial hair.

Sikhs have been fighting against violent extremism and religious intolerance for centuries. A good friend of mine, Lt. Col. Claude Brittain, served as a Pentagon chaplain before he passed away last year. He always supported our efforts to help open doors for religious minorities. Bluntly, I asked him one day why he continues to stick his neck out for us. He told me that in order for him to be a good Christian, he felt compelled to stand up for Sikhs, Muslims, Hindus, Jews, and others. I shared the story of Tegh Bahadur with him and he teared up.

This is how we counter threats like ISIS. ISIS doesn’t believe in diversity or religious freedom. That’s their weakness and we have to learn to exploit it if we’re to have any chance of defeating their underlying ideology. You don’t have to go back too far in history to see that the Nazis were way more “uniform” than we were, and that’s why we fought them. We can fight wars with bullets and tanks, but it’s our American ideals that will ultimately win the day. America’s military should look like the people it serves.