As North Korea Threatens Guam, US Runs Joint Bomber Drills… Out Of Guam

As the fiery rhetoric raged this week between an apparently nuclear ICBM-equipped North Korea and U.S. President Donald J. Trump,... 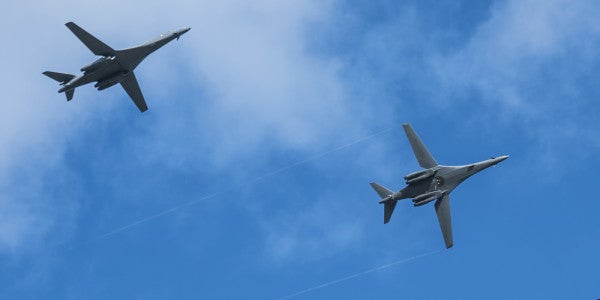 As the fiery rhetoric raged this week between an apparently nuclear ICBM-equipped North Korea and U.S. President Donald J. Trump, the Air Force partnered with Japanese and South Korean aircraft to run a series of drills with B-1B strategic bombers that recently deployed to the Pacific island of Guam.

Guam, of course, is the U.S. territory that North Korea threatened August 9 with “an enveloping fire” from its Hwasong-12 “strategic ballistic rocket.” That threat came a day after multiple outlets reported that the threadbare communist regime in Pyongyang had successfully built a nuclear warhead small enough to be delivered on its ICBMs, “crossing a key threshold on the path to becoming a full-fledged nuclear power,” as the Washington Post put it.

Trump’s response to that news was to further fan the flames of belligerence between the U.S. and the DPRK. Speaking Aug. 8 from the golf course he owns in Bedminster, N.J., where’s he’s huddled up for a 17-day “working vacation,” the president told reporters that if North Korea “make any more threats to the United States… they will be met with fire and fury and frankly power, the likes of which this world has never seen before.”

As North Korea responded to that Kim Jong Un-esque ultimatum with overt threats against Guam, U.S. B-1Bs based on the island drilled with their Japanese and South Korean partners, “demonstrated the U.S. commitment to regional allies, increased readiness and exercised the right under international law ‘to fly legally in the place and time of our choosing,’” according to a DoD news release.

The contingent of B-1Bs is from the 37th Expeditionary Bomb Squadron and recently deployed to Guam from Ellsworth Air Force Base in South Dakota, DoD officials said. Here, according to those officials, is how the bombers spent their Monday morning:

After taking off from Andersen Air Force Base, Guam, the B-1s — assigned to the 37th Expeditionary Bomb Squadron — flew to Japanese airspace, where they were joined by Japanese F-2 fighter jets. The B-1s then flew over the Korean Peninsula, where they were joined by South Korean KF-16 fighters. The B-1s then performed a pass over the Pilsung Range before leaving South Korean airspace and returning to Guam.

It's important to note that the B-1Bs aren’t nuclear-armed bombers anymore; the U.S. relinquished that capability under the terms of the START nuclear treaty with Russia, negotiated under President Ronald Reagan and signed by his successor, George H.W. Bush. But the Lancer supersonic bombers — still the fastest in the U.S.’s arsenal — remain a fixture of the American strategic deterrent fleet, capable of dropping conventional precision-guided munitions on far-flung targets in fast strikes.

The Pentagon’s statement never mentioned North Korea or Kim (or Trump, for that matter) by name, but the tiny tyrannical fiefdom’s specter hung over the exercise. “As demonstrated today, our air forces stand combat-ready to deliver air power when called upon,” the 37th EBS commander, Lt. Col. Daniel Diehl, said in the statement.

One of Diehl’s pilots, who was not named in the statement, put it even more bluntly.

“How we train is how we fight,” he said, “and the more we interface with our allies, the better prepared we are to fight tonight.”