On June 6, the U.S. military sent two B-1B Lancer bombs from Guam to the South China Sea, a move... 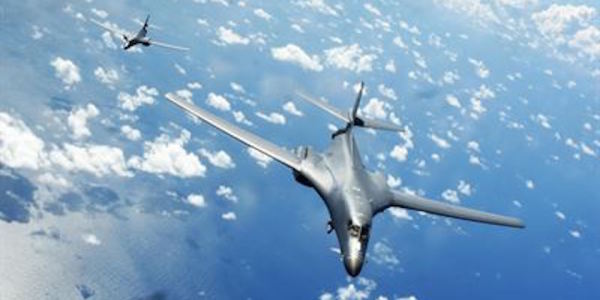 On June 6, the U.S. military sent two B-1B Lancer bombs from Guam to the South China Sea, a move that challenges China's increasingly aggressive territorial claims over island chains in the waterway, which the U.S. recognizes as international waters.

The following day, the Air Force said in a statement that the bombers had flown over the area to assert the right to treat the region as international territory, reported the South China Morning Post.

China appears unfazed. According to Reuters, Chinese Foreign Ministry spokesman Geng Shuang said there was “no conflict” created by the bombers flying over the East and South China Seas, but he added that “China resolutely opposes individual countries using the banner of freedom of navigation and overflight to flaunt military force and harm China's sovereignty and security.”

China has been building more strategic outposts across the South China Sea, which has U.S. officials concerned the nation will create problems in the region, where nearly $5 trillion worth of trade is made by ships.

But what’s more concerning in the short term is that the challenge came just one day before President Donald Trump and Chinese President Xi Jinping were set to meet at the G20 summit in Hamburg, Germany, to discuss urgent threats like North Korea’s nuclear weapons program.

“The Chinese military will resolutely safeguard national sovereignty and security as well as regional peace and stability,” reads a statement from the Chinese Defense Ministry provided to Reuters.

The U.S. bombers were purportedly coming from conducting training exercises with the Japanese military in the East China.

As China has become increasingly territorial over the region, the U.S. has begun to assert itself more and more.

Last month two other Lancers flew from Guam over the South China Sea, and in May, the Navy performed a drill just 12 nautical miles from one of China's artificial islands, Reuters reports.