What We Know About China’s Brand New Homegrown Aircraft Carrier

On Wednesday morning, China launched its first domestically designed and built aircraft carrier amid rising tensions with North Korea, according... 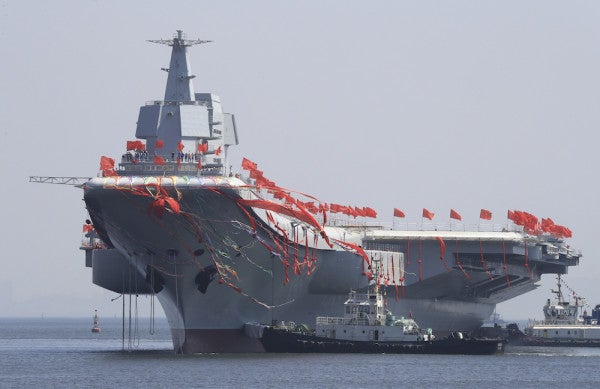 On Wednesday morning, China launched its first domestically designed and built aircraft carrier amid rising tensions with North Korea, according to Associated Press.

First announced in 2013, the unnamed vessel was launched from a drydock in Dalian Shipyard in Liaoning Province and towed to a nearby wharf, China's Ministry of National Defense said.

But Wednesday’s launch is hugely symbolic for a Beijing with growing military ambitions in the South China Sea, signifying “a major stage of progress of our country’s indigenous design and construction of aircraft carriers,” as a PLA news bulletin put it.

Here’s what we know about the newest addition to the Chinese navy:

She owes its origins to the Soviet Union

Constructed by the Dalian Shipbuilding Industry Company, the unnamed carrier is officially a Type 001A aircraft carrier, designed based on theKuznetsov-class carriers that were the last class commissioned by the Soviet Union.

China’s first aircraft carrier, the Liaoning, was built on an actual Kuznetsov-class frame, a “rusting Soviet-era hull from Ukraine” and launched in 2011, the New York Times reports.

The new carrier’s measurements clock in at 50,000 tons, 1,033 feet long and 246 feet wide — slightly larger than the Liaoning, but far smaller than the mightiest carriers in the U.S. Navy, as the Agence France-Presse notes.

She’s also less muscular than the Navy’s current fleet. Powered by conventional steam turbines, the Type 001A “has a slower speed and far more limited range than a typical U.S. nuclear-powered aircraft carrier,’ per the Financial Times.

She includes a ski jump

With its initial design envisioning a carrying capacity of 36 Shenyang J-15 multirole fighter jets, the Type 001A inherited the “ski ramp” that the Liaoningused to launch its own fleet of J-15s, a departure from carriers like the U.S. Navy’s Nimitz-class vessels that rely on catapults to help aircraft take flight. From Popular Science:

The advantage of [Short Takeoff But Arrested Recovery] STOBAR carriers is that they are simpler to build and operate than a catapault, not to mention cheaper. That comes at a price; they are only suitable for launching fighter/attack jets, which have a high enough thrust/weight ratio to reach high speeds needed to launch off a ski ramp. (Some fighter jets, like the J-15, have enough engine output to take off with a useful surface attack load and decent fuel load.) Subsonic aircraft, such as transport aircraft, airborne early warning and anti-submarine warfare aircraft are unable to launch off a ski ramp. This limits the aircraft carrier's varied support aircraft to slower and smaller helicopter platforms.

And some brand new radar action

The new carrier’s command island, which houses the bridge and flight control center, was so large that Dalian engineers had to affix it to the hull in two distinct components. But it was worth the effort for the upgraded radar systems, a major leap forward from the Liaoning’s capabilities. From Popular Science:

The new island will be far more capable in what it offers the ship. While the Liaoning has older Type 346 active electronically scanned array (AESA) radars (also found on the Type 052C destroyer), CV-17 will have newer Type 346A radars to control its J-15 fighters and detect enemy aircraft and missiles. The best indicator of what the completed CV-17 will look like actually comes from the island on the “land” carrier test building in Wuhan, which has also been upgraded with Type 346A radars this year.

The aircraft carrier USS Nimitz (CVN 68) participates in a strait transit exercise in the Pacific Ocean.Photo via DoD

She’s part of a bigger picture:

A 2015 roadmap for building and developing the Chinese military envisioned a more aggressive approach to naval operations for the People’s Liberation Army in the coming years, its focus shifting from “offshore waters defense” to the combination of “offshore waters defense” with “open seas protection.” As such, the Type 001A carrier is part of a large play to enhance the navy’s capabilities for “strategic deterrence and counterattack, maritime maneuvers, joint operations at sea, comprehensive defense and comprehensive support,” according to Beijing’s State Council Information Office.

The new carrier is certainly a step toward achieving those goals. But based on what we know about the Type 001A, we’ll take a Nimitz-class nuclear-powered supercarrier over this unnamed hunk of junk any day.