“It's probably one of the biggest highlights of my life, to be able to help a Marine unit during a firefight" 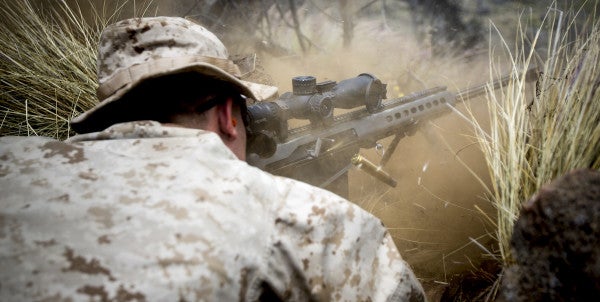 The Barrett M107 .50-caliber long-range sniper rifle is a firearm made for the modern war on terrorism. Officially adopted by the U.S. Army in 2002 and boasting a 2,000-meter range, a suppressor-ready muzzle brake, and recoil-minimizing design, the semi-automatic offers “greater range and lethality against personnel and materiel targets than other sniper systems in the U.S. inventory,” in an assessment by Military.com.

While Barrett’s reputation of “flawless reliability” has made the M107 the sniper weapon of choice, the rifle is just like any other essential tool: It often breaks when you need it most. And that’s apparently what happened to one Marine Corps unit pinned down in a firefight, according to one of Barrett’s longtime armorers.

Don Cook, a Marine veteran who’s been maintaining M107s for more than two decades, told National Geographic in 2011 that he one day received a call to Barrett’s workshop from a harried young Marine. During maintenance of the unit’s M107, the Marine had bent the ears of the rifle’s lower receiver; the next day, after engaging the enemy, they discovered the rifle wouldn’t fire consistently.

Despite the unit’s lack of tools (and time), Cook knew exactly what to do. The armorer instructed the Marines to use the bottom of the carrier to bend the ears back down. Within 45 seconds, the weapon was firing properly. “Thank you very much,” Cook says they told him, then he heard a dial tone. They had a firefight to get back to.

“It’s probably one of the biggest highlights of my life, to be able to help a Marine unit during a firefight,” Cook told National Geographic.

Watch him recount the incident himself in this excerpt from Sniper Inc, the National Geographic documentary about the Barrett family and the story of the M107: