The Army is officially doubling down on its purchase of the vaunted Multi-Role Adaptive Rifle (MRAD) to replace the existing bolt-action sniper rifles in its arsenal, according to a new solicitation 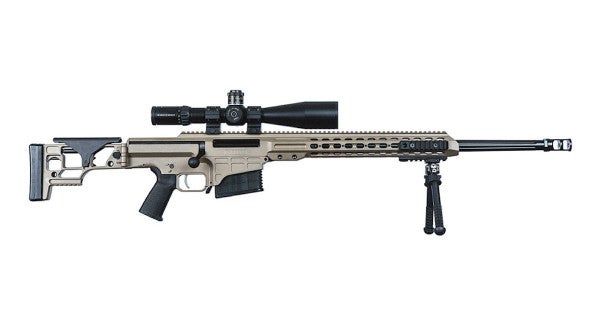 The Army is officially doubling down on its purchase of the vaunted Multi-Role Adaptive Rifle (MRAD) to replace the existing bolt-action sniper rifles in its arsenal, according to a new solicitation.

Army Contract Command, on behalf of Project Manager Soldier Lethality (PM SL), is searching for “potential sources” capable of furnishing the service with the MRAD as the Mk22 Advanced Sniper Rifle (ASR), according to a new request for information.

Manufactured by Barrett Firearms, the MRAD is a bolt-action, mutli-caliber sniper rifle “capable of delivering precision and rapid fire on personnel targets” at ranges of up to 1500 meters, according to the RFI.

The rifle will will come chambered in 7.62×51 mm NATO, .300 Norma Magnum, and .338 Norma Magnum with the help of a separate conversion kit, as Task & Purpose has previously reported.

In Army budget documents, the service had previously referenced MRAD as the Precision Sniper Rifle, or PSR.

The Army originally wanted to purchase 536 MRADs under the PSR designation for a total of $10.13 million, according to the service's fiscal year 2021 budget request, an increase over the 357 systems that the service initially purchased for $5.74 million the previous fiscal year.

Alton Stewart, a spokesman for the Army's PEO Soldier, had previously confirmed to Task & Purpose that the service intends to replace both the M107 sniper rifle and M2010 Enhanced Sniper Rifle with the MRAD.

The MRAD will eventually become the “primary anti-personnel sniper weapons system” for all of the service's sniper teams, according to Army budget documents, offering “improved accuracy in a lighter weight package” over the standard M107 system.

The system also includes a sound suppressor and direct view optics with fire control capabilities which “allows snipers, when supplemented with a clip-on image intensifier or thermal sensor system, to effectively engage enemy snipers, as well as crew served and indirect fire weapons virtually undetected in any light condition,” according to Army budget documents.

SOCOM originally developed a PSR, dubbed the Mk 21 Precision Sniper Rifle, with Remington Arms' Modular Sniper Rifle chambered in .300 Winchester Magnum and .338 Lapua Magnum in 2013 before initiating the command's own ASR program as a replacement.

“The Army PSR program is adapting the rifle selected under the SOCOM ASR program,” Stewart explained. “The initial rifle selected (Remington MSR, Mk21) did not conform to SOCOM requirements at the time and the program was re-competed with the Barrett MRAD (Mk22) selected as the rifle solution.”

It's worth noting that the MRAD is also the same sniper system the Marine Corps also wants to procure under SOCOM's ASR program as part of the service's fiscal year 2021 budget request.

The Army's request for 536 sniper systems is just the beginning. According to budget documents, the service plans on purchasing an additional 1,516 PSR systems between fiscal years 2022 and 2025, bringing the service's arsenal to 2,545 at an estimated cost of $45.476 million through fiscal year 2025.

The service plans to begin fielding of the MRAD starting in the fourth quarter of fiscal year 2021.

Related: US military snipers are amped to get their hands on the rifle that the Army, Marine Corps, and SOCOM all want