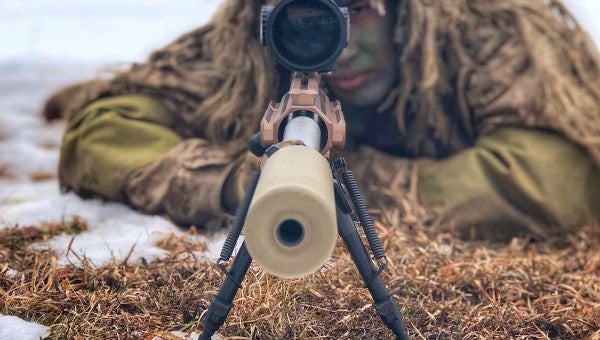 The wait is over: the Marine Corps's brand new sniper is officially ready for action.

“Scout snipers are now being fielded a weapon system that makes them even more lethal at distance than they were previously,” MARCORSYSCOM project officer Capt. Nick Berger said in a release. “This weapon better prepares us to take the fight to any adversary in any clime and place.”

Selected back back in March 2018 as a much-needed and long-overdue replacement for the M40 sniper system that Marines have wielded since the Vietnam War, the Mk13 is chambered in .300 Winchester Magnum and offers an effective range well over 1,000 yards,

While that effective range is nowhere near that of the Army's 1,300-yard M2010 Enhanced Sniper Rifle and U.S. Special Operations Command's 1,600-yard Precision Sniper Rifle, it far outstrips the M40's comparatively limited reach amid the Pentagon's ongoing emphasis on lethality and precision fires.

“When shooting the Mk13, the bullet remains stable for much longer,” MARCORSYSCOM infantry weapons team leader Maj. Mike Brisker said in a release. “The weapon gives you enough extra initial velocity that it stays supersonic for a much longer distance than the M40A6.”

The Corps started fielding the a handful of infantry and reconnaissance battalions and scout sniper schoolhouses with the 1st Marine Expeditionary Force in September 2018, with plans to roll out the new system II MEF and II MEF units.

But according to MARCORSYSCOM, a scout sniper platoon with the “Darkhorse” 3rd Battalion, 5th Marines have been enjoying the Mk13 for “more than a year” — and according to the system's program officers, the feedback has been overwhelmingly positive.

“At our new equipment trainings, the resounding feedback from the scout snipers was that this rifle is a positive step forward in the realm of precision-fire weapons,” Berger, the MARCORSYSCOM project officer, said in the release. “Overall, there has been positive feedback from the fleet.”