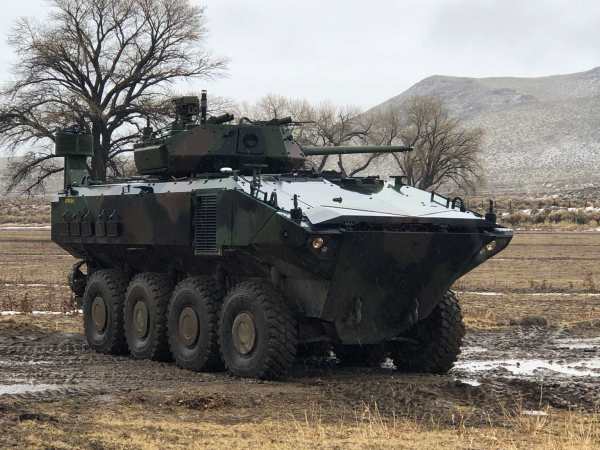 Buckle up, Marines: A variant of the Corps first new amphibious combat vehicle since the Vietnam War will officially come outfitted with a lightweight version of the Army's powerful new Stryker 30mm cannon.

BAE Systems — the maker of the Marine Corps' brand new Amphibious Combat Vehicle — has selected Kongsberg’s MCT-30 remotely operated 30mm turret currently in use across the Army's Stryker fleet for use in the program, the company announced last week.

According to a Marine Corps Systems Command spokeswoman, the Corps' MCT-30 variant will be “a lighter weight version” of the Army's current Stryker system, using the Navy's standard Mk44 Bushmaster II rather than the Army's XM813 cannon.

BAE System was awarded several contract options for the ACV in June 2018 for the low-rate production of 30 vehicles, with plans for full production of some 704 ACVs to begin by 2020 at the earliest.

In a news release, Kongsberg announced that it would deliver up to 150 of the MCT-30 turrets to BAE as part of a “phased program” starting in 2021.

The selection of the MCT-30 turret comes more than a year after the Marine Corps issued an RFI detailing three specific mission role variants: a command vehicle (ACV-C), a recovery-maintenance vehicle, (ACV-R) and the up-gunned ACV with an aggressive 30mm cannon (ACV-30).

The addition of the 30mm cannon represents a nice boost in firepower. As Marine Corps Times notes, “the older [Amphibious Assault Vehicle] had space for a 40mm grenade launcher, but in direct vehicle-on-vehicle fighting the 30mm cannon offers fast, high-volume direct fire.”

The 30mm cannon also has applications beyond direct fire: Indeed, the Army has deployed Stryker infantry combat vehicles outfitted with 30mm cannons to eastern Europe since 2017 as part of a larger return to Cold War-era short-range air defense systems in anticipation of incoming aerial threats from missiles to drones.

As Task & Purpose previously reported, missiles and drones are almost certainly threats that the Marine Corps will almost certainly face during a future amphibious assault on, say, the man-made fortresses that China's been standing up across the South China Sea.

“Every ship has to be a warship that can defend itself, have an offensive striking capability and be able to deal with the threats that are coming in, be it a cyber threat – so it needs a good network – or whether it's a kinetic threat in the form of a missile that's coming at it,” Lt. Gen. Brian Beaudreault, deputy commandant of the Marine Corps for plans, policies and operations, said in January 2019.

How far the Marine Corps plans on proliferating the 30mm cannon throughout its nascent ACV fleet remains to be seen: In April 2019, Navy and Marine Corps leaders told lawmakers that a full rate production decision was scheduled for the third quarter of fiscal year 2020, with the ACV on schedule to achieve initial operational capability in the fourth quarter.

Should all go according to plan, Marines with the I Marine Expeditionary Force will be the first to receive the new vehicle starting that quarter.