Marine Corps limited amphibious assault vehicle use after one sinks off California coast, killing one Marine

The top Marine general has ordered a halt to the use of amphibious assault vehicles in the water as officials... 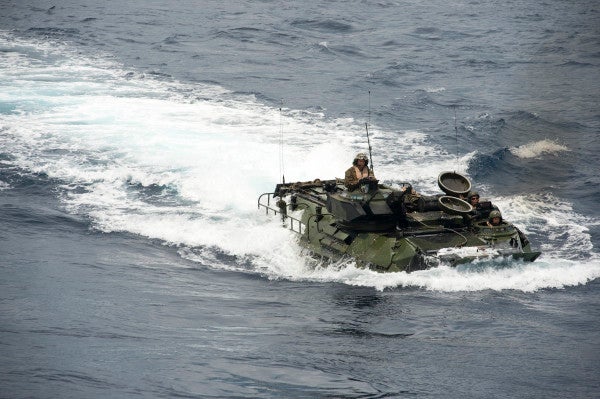 The top Marine general has ordered a halt to the use of amphibious assault vehicles in the water as officials try to determine what caused one of the vehicles to sink Thursday off the Calif. coast, resulting in the death of at least one Marine and eight other service members being declared missing.

“All AAVs across the fleet will be inspected,” said Gen. David Berger, commandant of the Marine Corps, during a Friday press conference at Camp Pendleton. “This mishap is under investigation and we'll share the results of it when it is complete.”

The incident occurred at around 5:45 p.m. as Marines assigned to the 15th Marine Expeditionary Unit were conducting training near San Clemente Island. They were returning to the ship in one of the vehicles, sometimes called “amphibious tractors,” which can move about two dozen troops from ships to shore.

Fifteen Marines and one sailor were inside the vehicle at the time it sank, officials said. Eight troops were recovered: one died, two were hospitalized and remain in critical condition, and five others were returned to their ship, Berger said.

Seven Marines and one sailor remain missing, Berger added. Officials declined to name the deceased Marine until family members could be notified.

“We are deeply saddened by this tragic incident. I ask that you keep our Marines, Sailors, and their families in your prayers as we continue our search,” Col. Christopher Bronzi, 15th MEU commanding officer, said in a statement.