'It is with a heavy heart, that I decided to conclude the search and rescue effort.' 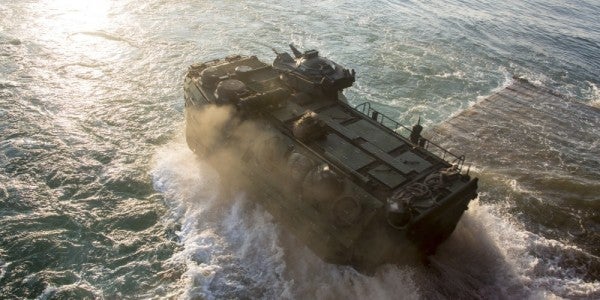 The seven Marines and one sailor who have been missing since an amphibious assault vehicle sank on Thursday are now considered dead, Corps officials announced on Sunday.

“It is with a heavy heart, that I decided to conclude the search and rescue effort,” Col. Christopher Bronzi, 15th MEU commanding officer said in a statement. “The steadfast dedication of the Marines, Sailors, and Coast Guardsmen to the persistent rescue effort was tremendous.”

The names of the eight service members are being withheld pending next of kin notification.

Search and rescue operations for the 7 Marines and 1 Sailor have concluded. All eight missing service members are presumed deceased. Efforts will now turn to search and recovery. All next-of-kin have been notified. Keep our 15thMEU families in your thoughts and prayers. @1stMEF

A total of 15 Marines and one sailor were on the amphibious assault vehicle when it sank during a training exercise near San Clemente Island, California.

One Marine was pronounced dead at Scripps Memorial Hospital La Jolla on Thursday and two other Marines remain hospitalized in critical condition.

“Our thoughts and prayers have been, and will continue to be with our Marines’ and sailor’s families during this difficult time,” Bronzi said. “As we turn to recovery operations we will continue our exhaustive search for our missing Marines and sailor.”

Marine Corps Commandant Gen. David Berger has suspended water operations for the Corps’ fleet of amphibious vehicles so that each vehicle can be inspected.

“I know all of us in the USMC family are extremely saddened following the announcement of the end of SAR [search and rescue] operations,” Berger tweeted on Sunday. “This difficult decision was made after all resources were exhausted. Our prayers continue to be with the family and friends of the 8 Marines and one Sailor we lost.”

This is the most serious incident involving am amphibious assault vehicle since 2017, when a vehicle caught fire after striking a gas line at Camp Pendleton, California, injuring 14 Marines and one sailor.

In 2011, a Marine died when an amphibious assault vehicle sank off Camp Pendleton. Five other Marines escaped.

The Marine Corps plans to replace its current amphibious vehicles, which first entered service in the 1970s, with new amphibious combat vehicles, but the process will take several years to complete.

All eight service members are presumed deceased. The 15th MEU and the ARG leadership determined that there was little probability of a successful rescue given the circumstances of the incident.

On July 30, 15 Marines and one Sailor were participating in a routine training exercise off the coast of San Clemente Island, California, when the amphibious assault vehicle (AAV) they were riding in began to take on water and sank. Of the 16 service members, eight Marines were rescued, one died, and two others are in critical condition at a local hospital.

“It is with a heavy heart, that I decided to conclude the search and rescue effort,” said Col. Christopher Bronzi, 15th MEU Commanding Officer. “The steadfast dedication of the Marines, Sailors, and Coast Guardsmen to the persistent rescue effort was tremendous.”

Over the course of the at-sea search, Marine Corps, Navy, and Coast Guard helicopters, ships, and watercraft searched more than 1,000 square nautical miles.

“Our thoughts and prayers have been, and will continue to be with our Marines’ and Sailor’s families during this difficult time,” said Bronzi. “As we turn to recovery operations we will continue our exhaustive search for our missing Marines and Sailor.”

Efforts will now turn to finding and recovering the Marines and Sailor still missing. Assisting in the recovery efforts is the offshore supply vessel HOS Dominator, as well as Undersea Rescue Command, utilizing their Remotely Operated Vehicle (ROV) to survey the sea floor.

The circumstances surrounding the incident are being investigated.

The names of the Marines and Sailor will be released 24 hours after next of kin notification.