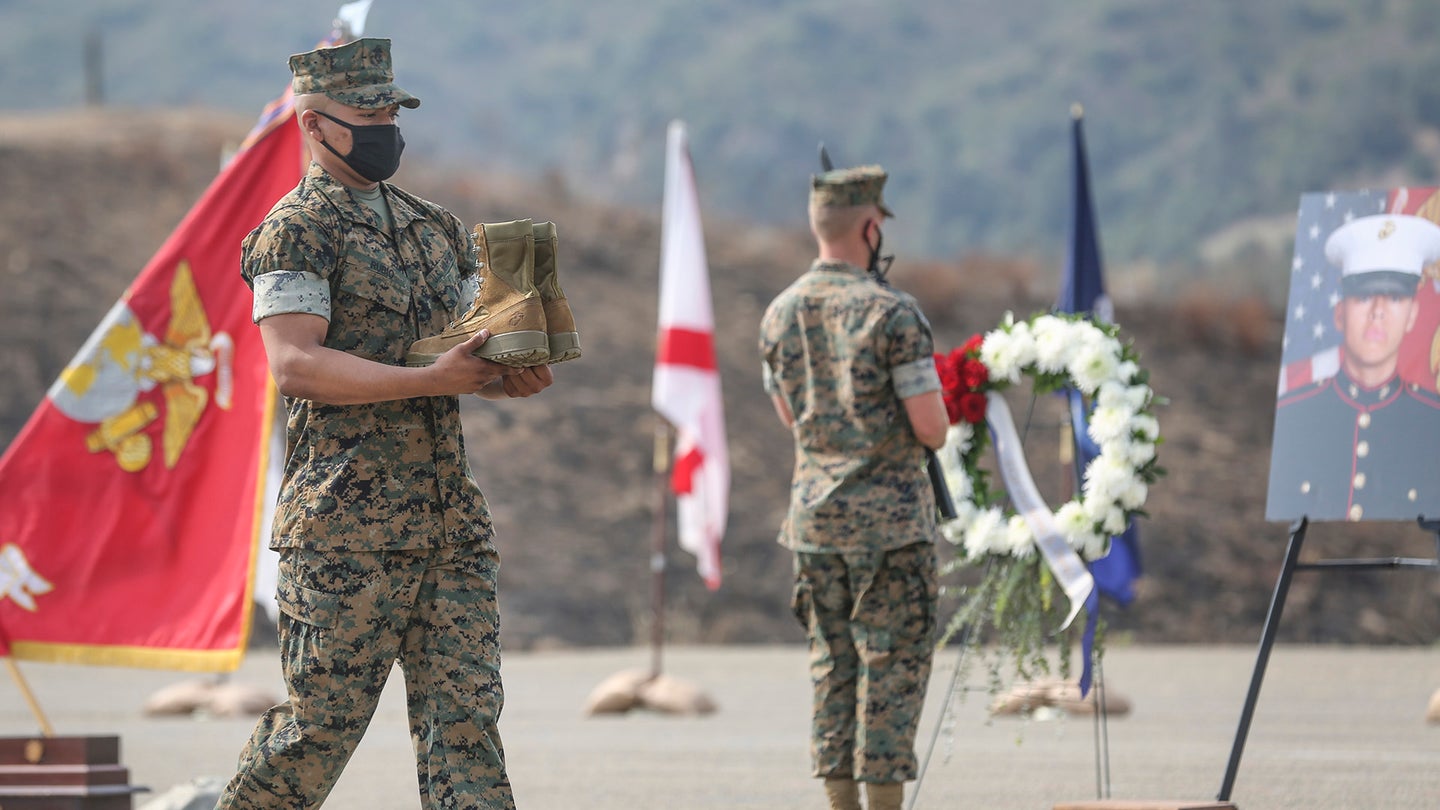 A U.S. Marine with Battalion Landing Team 1/4, 15th Marine Expeditionary Unit, carries a pair of combat boots during a memorial service at Marine Corps Base Camp Pendleton, California, Aug. 21, 2020. The service was held in remembrance of the eight Marines and one Sailor from Bravo Company, BLT 1/4, 15th MEU, who died in an assault amphibious vehicle mishap off the coast of San Clemente Island, California, July 30. (U.S. Marine Corps photo by Cpl. Dalton S. Swanbeck).
SHARE

“Fire the generals.”  That is how Rep. John Garamendi (D-Calif.) suggested the Marine Corps and the rest of the military solve the chronic problems of training accidents, vehicle rollovers, and aircraft crashes.

Garamendi spoke to Task & Purpose about the Marine Corps’ recently released investigation into the July 30 sinking of an amphibious assault vehicle during an exercise that cost the lives of eight Marines and one sailor. It was the Corps’ deadliest accident involving an amphibious vehicle.

The Congressman argued that accountability should start at the very top; however, that’s not the military’s way.

Like the 2017 ship collisions that killed 17 sailors and the ambush in Niger later that year in which four soldiers were killed, the deadly training accident on July 30 was the result of a series of underlying issues that extended far beyond one unit’s chain of command.

But when it came time to assign responsibility for the shortcomings leading up to and during the accident, top Marine Corps officials placed most of the blame on the vehicle commander.

On the other end of the spectrum: Maj. Gen. Robert F. Castellvi, the former commanding general of the 1st Marine Division, escaped any sort of punishment even though the head of U.S. Marine Corps Forces Pacific found that Castellvi “bears some responsibility” for the fact that the platoon did not go through an evaluation that would have revealed the training and readiness problems plaguing the unit.

Castellvi, who is now the Marine Corps’ Inspector General, was also responsible for making sure that all of his troops were trained on how to get out of a submerged vehicle before they transferred to the 15th Marine Expeditionary Unit, Lt. Gen. Steven Rudder wrote in his endorsement of the investigation. At the time of the accident, only one of the nine service members inside of the vehicle had completed the training.

It is hardly a surprise that Castellvi’s superiors decided not to discipline him. Former Chief of Naval Operations Adm. John Richardson presided over the Navy during the ship collisions and numerous other catastrophes, yet somehow he repeatedly avoided getting fired.

Navy Adm. Philip Davidson, who was head of U.S. Fleet Forces Command at the time of the deadly collisions, reportedly told concerned commanding officers afterward that if they couldn’t take their ships to sea with the resources at hand, “then we’ll find someone who will.”

Davidson went on to become head of U.S. Indo-Pacific Command, and in 2019 he told Congress, “The fact of the matter is 280-odd other ships weren’t having collisions.”

And following the Niger ambush, the Army unsuccessfully tried to promote Col. Bradley Moses, who approved the mission, and Lt. Col. David Painter, who reportedly denied a request from the Special Forces team’s leader to return to base before they were attacked.

Ultimately, Painter’s promotion to colonel failed in the Senate and the Army withdrew Moses’ nomination to advance to brigadier general under pressure from Congress.

But Christiana Sweetwood, who lost her 18-year-old son Lance Cpl. Chase D. Sweetwood in the accident, said she believes the entire Marine Corps is responsible for the myriad of failures that led up to the sinking, including Commandant Gen. David Berger.

“From Commandant Berger down, these people need to be held accountable,” she said.

Read on: ‘Fire the generals’ — Who is to blame for the Marine Corps’ deadliest training accident in decades