Navy Admiral on ship collisions: Those were tragedies, but what about the other 280 ships that didn’t collide?

Navy Adm. Philip Davidson thinks recent ship collisions that left more than a dozen sailors dead were tragedies, but as he told the Senate Armed Services Committee on Tuesday, we should also remember that 280 other ships didn't collide and that's gotta be worth something. 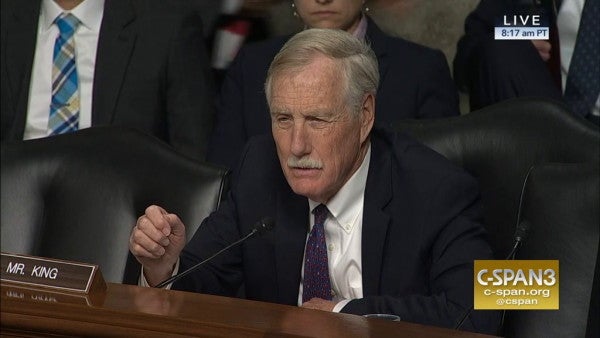 Navy Adm. Philip Davidson thinks recent ship collisions that left more than a dozen sailors dead were tragedies, but as he told the Senate Armed Services Committee on Tuesday, we should also remember that 280 other ships didn't collide and that's gotta be worth something.

Seriously. He actually fucking said that.

“We can't forget one other thing,” said Davidson in his testimony. “These two collisions were a tragedy, there's no doubt about it. And all of the senior leadership of the Navy feels an immense amount of accountability for that, I'll come back to it. But the fact of the matter is 280-odd other ships weren't having collisions.”

With that, he took a breath, perhaps had a momentary thought of, hey should I continue with this? and then dove in headfirst: “More than a dozen of those other ships were performing exceptionally well.”

The head of the Indo-Pacific Command, a four-star admiral, indeed put forth idiotic logic that sounded more like a bit from Stephen Colbert. Imagine for a moment, the superintendant at West Point: Well sir, yes we have a problem with sexual assaults rising 50% over the past two years, but let's keep in mind that there were thousands of cadets who didn't report sexual assaults.

The head of Naval Special Warfare: Well, yes sir, Senator, we've had a recent spate of disciplinary issues with SEALs and at least one currently stands accused of stabbing a prisoner in the neck. But please remember that there are so many other SEALs who haven't committed any war crimes yet.

As you can see in video of the testimony, Sen. Angus King (I-Maine) wasn't buying it and cut him off.

“Airplanes are landing all over America and just because they aren't all crashing doesn't mean they don't need a high level of maintenance,” King said. “To tell me that isn't very convincing. I think it was 40 years since we've had collisions of this nature? Are you saying that there were no failures that led to these collisions? Because there were 280 ships that didn't have collisions. Isn't that the standard? No collisions?”

“Yes sir, no collisions is the standard,” Davidson conceded. Oh thank God. Because for a second there I thought they may have changed the regulations.

“It's not fair to say that. Certainly it's been 40 years since we've had loss of life to that extent, but there had been collisions in the recent past.”

DAVIDSON: “The other thing that we have to remark about is the combat performance. We've had ships in the Red Sea shooting down anti ship cruise missiles. We've had extraordinary Tomahawk performance in this time frame. We had aviation squadrons shoot down a MiG aircraft from Syria. These units have been tested in combat and are doing quite well.”

KING: “And I'm not suggesting otherwise. What I'm suggesting is, I urge you to read that study. We had a preventable problem. There were multiple warnings that were not acted upon. And I want to be reassured that it is being acted upon.”

DAVIDSON: “But sir, this is where the Navy is feeling a huge amount of accountability for this. They tasked me to review those two collisions. I produced a 170-page report with 58 recommendations, and the Navy has moving out on those recommendations to provide the kind of unit personnel training, to provide advice and resources to the type commanders, the fleet commanders, the naval systems command. All with recommendations to improve this situation in a way that eliminates the variance that I'm talking about.”

I would like to take this moment to point out the eight family members I haven't murdered. https://t.co/bTb74CuUm5

SEE ALSO: Here's How Navy Crews Watch For (And Respond To) Collisions At Sea