President Donald Trump was in peak form during his recent televised cabinet meeting. 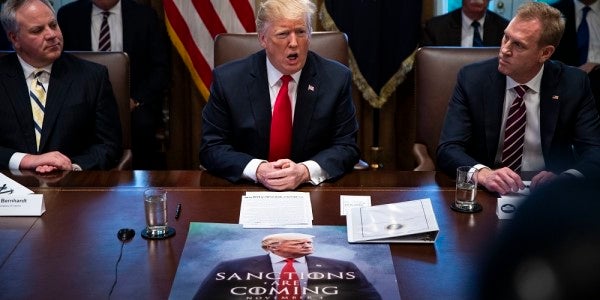 Providing further proof that we're all dead and this is hell, President Donald Trump spoke about a variety of national security issues during Wednesday's televised cabinet briefing, during which his one-liners came fast and furiously.

For your reading pleasure, below are the top five hot takes from Trump's legendary diatribe:

“I gave our generals all the money they wanted. They didn't do such a great job in Afghanistan. They've been fighting in Afghanistan for 19 years.

“General Mattis thanked me profusely for getting him $700 billion. He couldn't believe it. General Mattis thanked me even more the following year when I got him $716 billion. He couldn't believe it. Because our military was depleted. “Now we're rebuilding our military and we're getting — in fact, Pat was very responsible for a lot of the orders for the new F-35 fighter jets and F-18s, and all of the things we're doing, including ships and missiles and everything.

“So, I mean, I wish him well. I hope he does well. But as you know, President Obama fired him, and essentially so did I. I want results.”

“I just back from Iraq. We had a fantastic meeting with the generals and the Syria situation. I mean, I'm the only person in the history of our country that could really decimate ISIS, say we're bringing the troops back home over a period of time. I never said so quickly, but over a period of time. But everybody gives me credit for decimating ISIS.”

“When I became president, I had a meeting at the Pentagon with lots of generals. They were like from a movie. Better looking than Tom Cruise, and stronger.

“And I had more generals than I've ever seen, and we were at the bottom of this incredible room. And I said, 'This is the greatest room I've ever seen.' I saw more computer boards than I think that they make today. And every part of the Middle East, and other places that was under attack, was under attack because of Iran. And I said to myself, 'Wow.'”

5. Why the Soviet Union collapsed

“The reason Russia was in Afghanistan was because terrorists were going into Russia. They were right to be there. The problem is it was a tough fight. And literally, they went bankrupt. They went into being called Russia again, as opposed to the Soviet Union. You know, a lot these places you're reading about now are no longer a part of Russia because of Afghanistan.”

BONUS: Trump would have made a good general

“So, Taliban is our enemy. ISIS is our enemy. We have an area that I brought up with our generals four or five weeks ago, where Taliban is here, ISIS is here, and they're fighting each other. I said, 'Why don't you let them fight?' Why are we getting in the middle of it? I said, 'Let them fight. They're both our enemies. Let them fight.' 'Sir, we want to do it.' They go in and they end up fighting both of them.”It's the craziest thing I've ever seen. I think I would've been a good general, but who knows.”