Trump Was Right: The Navy’s ‘Digital’ Catapult Really Is An Expensive Mess

When President Donald Trump railed against the $13 billion USS Gerald R. Ford aircraft carrier's electromagnetic catapult as no match for "goddamned" steam, he may have been on to something — even if he didn't know it at the time 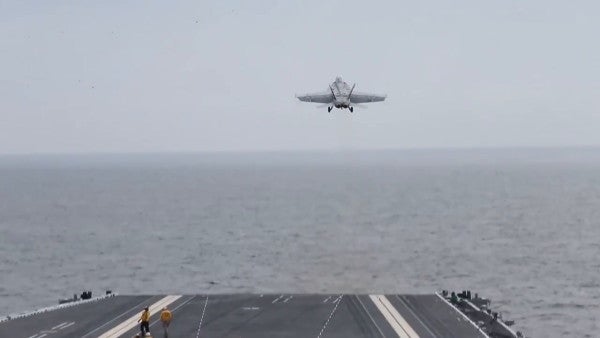 When President Donald Trump railed against the $13 billion USS Gerald R. Ford aircraft carrier's electromagnetic catapult as no match for “goddamned” steam, he may have been on to something — even if he didn't know it at the time.

According to the latest assessment of the next-generation carrier from the Pentagon's operational testing and evaluation arm, set for public release this week and obtained early by Bloomberg News' Tony Capaccio, the Ford's Electromagnetic Aircraft Launching System (EMALS) experienced 20 distinct failures during sea trials in the last year.

The evaluation indicates that that the Ford experience 10 “critical failures” out of 747 at-sea jet launches and an additional 10 “operational mission failures' during 763 landing attempts, And while a Navy spokesman told Bloomberg that those launch and landing attempts are “an insufficient number of events from which to draw conclusions with respect to reliability,” the Pentagon's director of operational testing suspects otherwise. From Bloomberg:

The Ford “will probably not achieve” its sortie rate requirement because of “unrealistic assumptions” that “ignore the effects of weather, aircraft emergencies, ship maneuvers and current air-wing composition on flight operations,” Robert Behler, the Pentagon's director of operational testing, said in his assessment of the carrier, obtained by Bloomberg News.

In a memo to Acting Defense Secretary Patrick Shanahan transmitting the annual report, Behler highlighted the Ford's problems, saying that although “improvements have occurred, poor and unknown reliability continues to plague the ship and key systems.”

These problems are far from new. The Pentagon's previous testing and evaluation assessment for 2017 detailed significant reliability issues ranging from “excessive airframe stress” to an inability to electrically isolate the catapult's complicated power systems in order to conduct maintenance and repairs without halting operations.

This is, well, a laugh riot considering that Trump, despite his propensity to avoid micromanaging the Pentagon like his predecessor, singled out the EMALs system as a high-tech boondoggle during an interview with Time magazine in 2017:

Speaking of hundreds of millions fo dollars: Bloomberg notes that the Navy is poised to announce a massive contract with Huntington Ingalls to build the service's next two Ford-class carriers at the same time. Hey, even a broken clock is right twice a day.

SEE ALSO: The Navy's Newest Carrier Finally Has The Critical Weapons System That The Navy Secretary Staked His Job On

WATCH NEXT: A Look At The USS Gerald R. Ford