When President Donald Trump railed against the electromagnetic catapult on the Navy’s brand new USS Gerald Ford and demanded a... 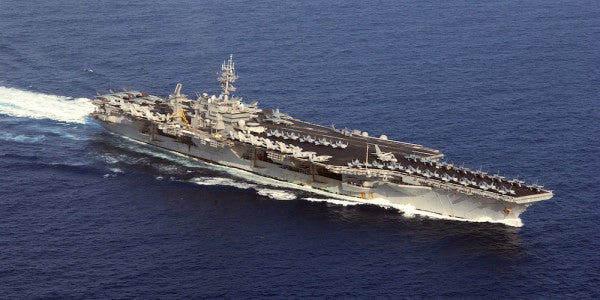 When President Donald Trump railed against the electromagnetic catapult on the Navy’s brand new USS Gerald Ford and demanded a return to “goddamned steam,” we’re not sure this is what he had in mind.

As part of the daunting and ridiculously expensive task of boosting its 275-ship fleet to 355 hulls in the coming years, the Navy is exploring ways to coax retired and mothballed ships into sailing the open seas again. And while Naval Sea Systems Command Vice Adm. Thomas Moore floated the idea of reactivating a flotilla of Oliver Hazard Perry-class frigates, he also offered a puzzling possibility: the return of the USS Kitty Hawk (CV-63), one of the military’s last conventionally powered aircraft carriers in service when decommissioned in 2009.

“Of the carriers that are in inactive status right now, Kitty Hawk is the one that you could think about,” Moore said in a June 1 interview with DefAero report. “The carriers are pretty old, so I think there's limited opportunity in the inactive fleet to bring those back, but we're going to go look at that ship by ship and put that into the mix.”

The first and last carrier of its class, Kitty Hawk has a long and illustrious history. Commissioned in 1961, the 82,000-ton supercarrier’s 18 deployments included six tours in Vietnam War’s, including one during the infamous Tet Offensive; providing contingency operations during the 1979 Iran hostage crisis; supporting U.S.-led coalition forces in Somalia and Iraq in the early 90s; and playing a central role in the early years of the Global War on Terror supporting the 2003 invasion of Iraq.

But the Kitty Hawk also has another nickname: “Shitty Kitty,” a term of endearment among many of her former sailors due to the aging vessel’s frequent breakdowns. In Richard Miller’s “A Carrier at War: On Board the USS Kitty Hawk in the Iraq War,” a Navy vet turned photojournalist laid out the carrier’s many problems: “This boat’s old. Old pipes, too many coats of paint, too many welds and re-welds. She’s been around too long. Lots of sailors don’t like her. She’s a pain in the ass to clean and too damned expensive to run.”

While the honor of “Shitty Kitty” is often overshadowed in the media by the 1972 “race riot” between black and white sailors during the carrier’s Vietnam deployment, perpetual maintenance and frequent accidents have remained a pillar of the ship’s identity. One former crewman even characterized the Kitty Hawk in 2017 as “a punishment ship” for less-than-orderly sailors, complete with “its own CDC disease in the form of ‘Kitty Hawk Gastro.’”

With these problems in mind, the prospect of the “Shitty Kitty’s” return to the Navy’s fleet seems trifling compared to the potential return of the Perry-class frigates, which Maritime Executive characterizes as “notoriously hard to sink”:

USS Stark survived two Exocet missiles fired by an Iraqi warplane in 1987, and USS Samuel B. Roberts managed to stay afloat after striking an Iranian mine the following year, despite severe damage. Both vessels were repaired and returned to service. In a live-fire exercise in 2016, the decommissioned USS Thatch absorbed four Harpoon anti-ship missiles; one Maverick missile; multiple Hellfire missiles; one 2,000 lb. bomb; one 500 lb. bomb; and one Mk. 48 torpedo. She stayed afloat for 12 hours (with calm weather, and without fuel or munitions aboard).

But there’s still certainly good reason to wave aside the Hawks’ potential issues. As the War Zone points out, reactivating the supercarrier might prove a useful bridge between the Navy’s current fleet of 10 operation carriers until the USS Gerald Ford is ready for the open seas, both closing the so-called “carrier gap” in the branch’s global deployments, especially with the Department of Defense’s increasing emphasis on fielding more high-tech aircraft to carry out strikes against enemy targets.

But more importantly, reactivating the “Shitty Kitty” might satiate Trump’s demand for a total of 12 seaworthy airbases to project U.S. power across the planet, despite distaste for the vessel among sailors. After all, the four catapults used to assist aircraft on Kitty Hawk-class carriers are all goddamned steam, all the time — just what the Pentagon needs to scare the bejesus out of China.