The USS Nimitz is back in the Middle East amid Iraq, Afghanistan drawdowns 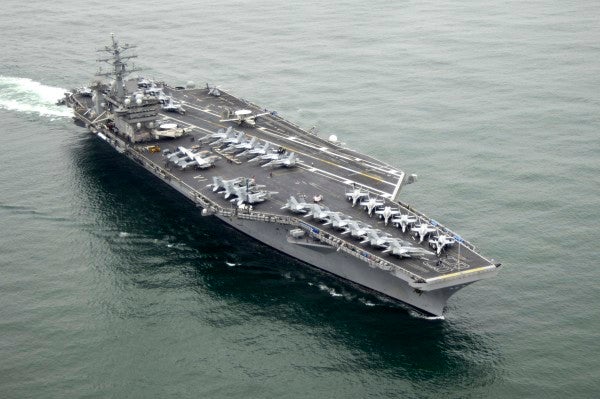 The aircraft carrier USS Nimitz has returned to the Middle East in case it is needed to provide air support during the drawdowns in Iraq and Afghanistan, defense officials said.

The Defense Department ordered the Nimitz to return to the U.S. Central Command theater of operations to make sure that the U.S. military has additional defensive capabilities for any contingency, a U.S. official said on condition of anonymity. The aircraft carrier had been in the region earlier in the fall and was most recently in the U.S. Indo-Pacific Command theater.

The Nimitz has been back in the waters off the Middle East since Nov. 25, said Navy Cmdr. Rebecca Rebarich, a 5th Fleet spokeswoman.

“There were no specific threats that triggered the return of the Nimitz Carrier Strike Group,” Rebarich said in a statement. “The return of Nimitz is centered on maintaining CENTCOM’s ability to remain postured and prepared to help preserve regional stability and security.”

Related: Trump reportedly asked for options to attack Iran but was talked out of it

However, the aircraft carrier is returning to the region amid heightened tensions with Iran over the recent assassination of one of the country’s top nuclear scientists.

Even though no country has taken responsibility for the Nov. 27 killing of Mohsen Fakhrizadeh, top Iranian officials have publicly blamed Israel and vowed to retaliate for Fakhrizadeh’s death.

No U.S. service members were killed but 110 troops at Al Asad Air Base were diagnosed with mild traumatic brain injury following the attacks, of which 29 soldiers were eventually awarded Purple Hearts.

So far, the U.S.-military-led coalition in Iraq and Syria has not made any changes to its force protection posture, a U.S. military official told Task & Purpose on Monday.