A defense official confirmed to Task & Purpose that a sailor is being questioned in connection with the fire but has not been charged. 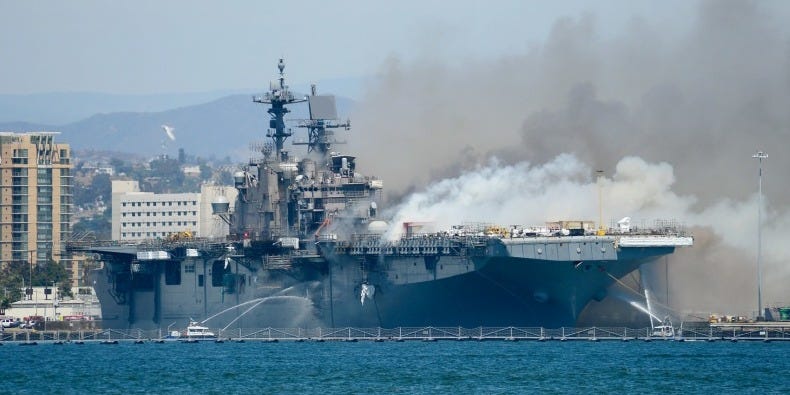 Investigators are questioning a sailor to see if the devastating fire that struck the amphibious assault ship USS Bonhomme Richard in July was intentionally set, a defense official confirmed on Thursday.

KGTV, an ABC television station in San Diego, first reported on Wednesday that the Naval Criminal Investigative Service was considering the possibility that the fire was a case of arson and had identified a sailor as a possible suspect.

A defense official confirmed to Task & Purpose that a sailor is being questioned in connection with the fire but has not been charged. No further information about the sailor was immediately available.

While NCIS and the Bureau of Alcohol, Tobacco, Firearms and Explosives are looking closely at the possibility that the fire was set on purpose, they have not reached a conclusion on the matter yet, the official said.

The massive ship burned for three days while it was tied to the pier at Naval Base San Diego. Chief of Naval Operations Adm. Michael Gilday later told Navy leaders that 11 of the ship's 14 decks had been damaged and the ship’s island was “nearly gutted,” Defense News reporter David Larter first revealed on July 22.

It would take years to repair the ship if the Navy tries to return the Bonhomme Richard to service, Rear Adm. Eric Ver Hage, the Navy Regional Maintenance Center commander and director of surface ship maintenance and modernization, said on Tuesday.

The Navy has not yet announced if the Bonhomme Richard is deemed too damaged to save.

If the ship is deemed a total loss, it would be the second Navy vessel lost to arson since 2012 when a fire aboard the Los Angeles Class submarine USS Miami caused up to $700 million worth of damage.

Casey Fury, a civilian shipyard worker, was later sentenced to 17 years in prison for setting the fire, reportedly because he wanted an excuse to go home early that day.

The Navy has not lost a ship the size of the Bonhomme Richard since the aircraft carrier USS Hornet was sunk during World War II at the Battle of Santa Cruz Islands on Oct. 27, 1942, Navy spokesman Lt. Sam Boyle told Task & Purpose in July.

Two other aircraft carriers were extensively damaged in 1945: USS Franklin and USS Bunker Hill, Boyle said. While both ships were rebuilt, they were decommissioned during the repairs and never returned to service.

Related: The Bonhomme Richard fire raises concerns over whether the Navy can repair ships damaged in war