Senior White House officials have spoken to Wilkie in the past month about the possibility that he could become defense secretary, NBC reporters Carol E. Lee and Courtney Kube first revealed on Monday. 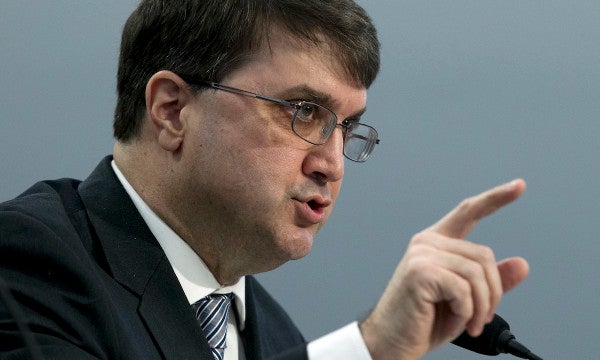 Senior White House officials have spoken to Wilkie in the past month about the possibility that he could become defense secretary, NBC reporters Carol E. Lee and Courtney Kube first revealed on Monday.

Trump has reportedly been unhappy with Esper since the defense secretary told reporters in June that he opposed using active-duty troops to help police respond to protests and riots across the country. Since then, the president has twice undercut Esper by overriding proposed cuts to the military healthcare system and announcing that funding for Stars and Stripes would not be cut.

Both the VA and Pentagon referred questions about the NBC story to the White House, which did not provide a comment for this story.

During an Aug. 16 White House news conference, Trump said he gets along with Esper – but in the same breath the president referred to his defense secretary by using an unflattering nickname

“Some people call him ‘Yesper,’” the president told reporters.

When asked if he had considered firing Esper, Trump replied: “I consider firing everybody.”

Wilkie’s tenure at the VA has been marked by controversy. He recently wrote a commentary denying media reports about veterans not getting their mail-order prescriptions on time due to the Trump administration’s changes to the U.S. Postal Service – even though a prominent veterans group says the VA confirmed to them that delivery of its mail-order prescriptions had been delayed.

ProPublica reported in February that Wilkie sought damaging information on a Navy officer who said she was sexually assaulted at a VA hospital. Wilkie has denied attempting to tarnish the reputation of the officer, who has contributed stories to Task & Purpose.

“I never would do that to a fellow officer,” Wilkie said in a statement to ProPublica. “It is a breach of honor.”

Wilkie is also an outspoken defender of the Confederacy, praising former Confederate President Jefferson Davis in a June 1995 speech marking Davis’ birthday that was reprinted in the August 1995 edition of the United Daughters of the Confederacy Magazine.