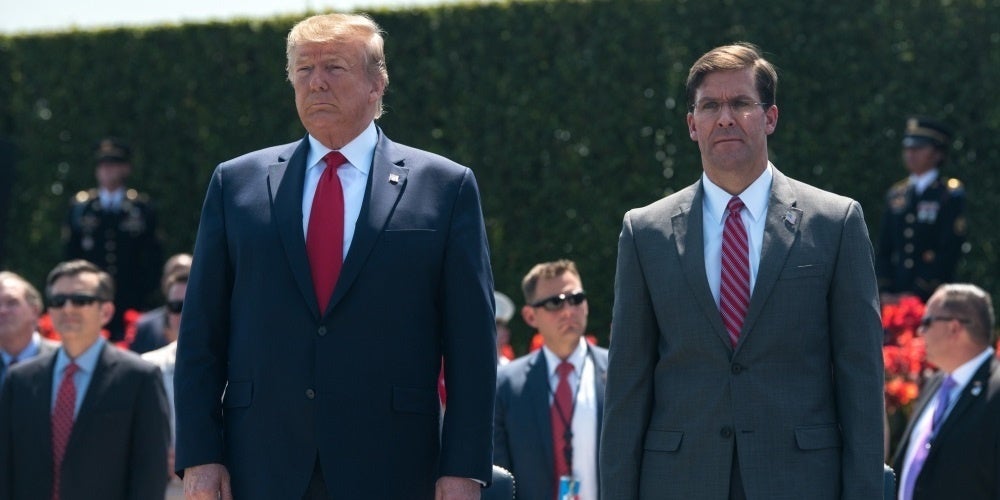 President Donald Trump announced on Monday that he has fired Defense Secretary Mark Esper, who had held the top job in the Pentagon since July 2019.

“I am pleased to announce that Christopher C. Miller, the highly respected Director of the National Counterterrorism Center (unanimously confirmed by the Senate), will be Acting Secretary of Defense, effective immediately,” Trump tweeted. “Chris will do a GREAT job! Mark Esper has been terminated. I would like to thank him for his service.”

…Chris will do a GREAT job! Mark Esper has been terminated. I would like to thank him for his service.

Miller became director of the National Counterterrorism Center on Aug. 10 after spending just under two months performing the duties of the assistant secretary of defense for special operations and low-intensity conflict.

He also co-wrote a commentary for Task & Purpose arguing that Special Forces needed to revive their traditional skills that allow them to successfully operate behind enemy lines.

Trump’s relationship with Esper reportedly became strained after the defense secretary told reporters in June that he did not believe active-duty troops should be used to respond to protests that were taking place across the country following the death of George Floyd at the hands of Minneapolis police officers.

On June 1, Trump had vowed to “deploy the United States military” if state and local officials refused to call out the National Guard to “dominate the streets.”

“I say this not only as secretary of defense but also as a former soldier and a former member of the National Guard: The option to use active-duty forces in a law enforcement role should only be used as a matter of last resort – and only in the most urgent and dire of situations,” Esper said at a Pentagon news conference. “We are not in one of those situations now. I do not support invoking the Insurrection Act.”

Trump reportedly yelled at Esper following the news conference and the defense secretary’s standing with the president had been irreparably damaged.

Later in the summer, Trump openly mocked Esper by calling him “Yesper” at an August news conference.

When a reporter asked Trump if he had considered firing Esper, the president did not exactly give his defense secretary a ringing endorsement, responding: “I consider firing everybody.”

The nickname “Yesper” has been used by some in national security circles to claim that Esper has been an obsequious sycophant who implemented all of Trump’s edicts to the Pentagon, no matter how ridiculous. But in an exclusive interview with Military Times reporter Meghann Myers, Esper said he was never Trump’s doormat.

“My frustration is I sit here and say, ‘Hm, 18 cabinet members. Who’s pushed back more than anybody?’” Esper said in the interview. “Name another cabinet secretary that’s pushed back,” he said. “Have you seen me on a stage saying, ‘Under the exceptional leadership of blah-blah-blah, we have blah-blah-blah-blah?’ ”

Trump and Esper have clashed at times, such as when the president overrode Esper by reversing $2.2 billion in planned cuts to the military’s healthcare system and restoring funding to the Stars and Stripes newspaper.

For both men, the final straw may have been their differences over whether to rename 10 Army bases that currently bear the names of Confederate officers.

Initially, the Army indicated it would not change the names of any of its bases, but as Black Lives Matter protests sprung up around the country following George Floyd’s death, Army Secretary Ryan McCarthy became open to the idea of renaming the bases after all.

But in June, Trump announced that he would not allow any of the bases named for Confederate commanders to be renamed.

“The United States of America trained and deployed our HEROES on these Hallowed Grounds, and won two World Wars,” Trump tweeted on June 10. “Therefore, my Administration will not even consider the renaming of these Magnificent and Fabled Military Installations.”

The following month, Trump was overheard talking by phone to Sen. Jim Inhofe (R-Okla.), chair of the Senate Armed Services Committee, about making sure the final version of the National Defense Authorization Act did not require the Army to rename the 10 bases, according to the New York Times.

Despite the president’s determination to have the U.S. military continue to honor the Confederacy, Esper did an end run around the White House by signing a July 16 memo that did not include the Confederate flag among those authorized to be flown at military installations.

In other words, he banned the Confederate flag without mentioning it by name.

Now Esper plans to work with lawmakers to include a provision in the National Defense Authorization Act that would strike all Confederate names from bases, Courtney Kube of NBC News first revealed.

Such a move would be certain to enrage Trump.

Instead, Hoffman said the Defense Department is working with Congress as lawmakers reconcile the House and Senate versions of defense bills.

“This does not indicate support for previously proposed legislative language,” Hoffman said in a statement. “Out of respect for the members of Congress who have sought technical assistance in good faith, we generally do not discuss these efforts.”

Related: There’s a problem with this Trump tweet on the Kurds in Syria, and it ain’t ‘Mark Esperanto