There’s a problem with this Trump tweet on the Kurds in Syria, and it ain’t ‘Mark Esperanto’

Mark Esper is the third person after James Mattis and Patrick Shanahan to helm the Pentagon since Donald Trump became president, and he's apparently not making much of an impression on the commander-and-chief 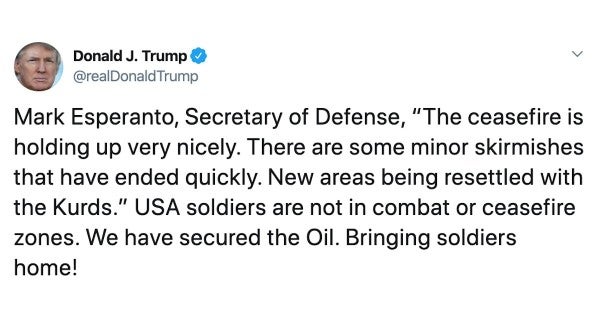 Mark Esper is the third person after James Mattis and Patrick Shanahan to helm the Pentagon since Donald Trump became president, and he's apparently not making much of an impression on the commander-and-chief.

On Sunday, Trump sent a
very real tweet on “Secretary Esperanto,” which is either a reference to a constructed international language developed more than 130 years ago and only spoken on the PA system inGattaca or an egregious instance of autocorrect.

But the whole 'Esperanto' thing isn't the biggest issue with this Sunday morning dose of awful. Indeed, Trump's tweet
came as Esper made an unannounced visit to Afghanistan amid U.S. efforts to restart potential peace talks with the Taliban, and according to reporters accompanying him there, this isn't even close to what Esper said.

Esper’s quote to us: " I think overall the ceasefire generally seems to be holding, we see a stabilization of the lines, if you will, on the ground, and we do get reports of intermittent fires, this and that, that doesn't surprise me necessarily.”

Same thing from Wall Street Journal correspondent Nancy Youssef, who reported on Saturday night that all of the 1,000 U.S. service members ordered to leave northeastern Syria “will move to western Iraq and will conduct U.S. operations” against ISIS there and are not “coming home.”

I am on the same trip and did not hear Esper mention resettled Kurds or oil. Or a name change. https://t.co/3rgvHrmDLf

This is the second time in three days that Trump has mentioned oil when nobody else has. On Friday, the president had declared that the U.S. has “secured the Oil” in the Middle East amid the ongoing political fallout from his withdrawal order and subsequent Turkish invasion of northern Syria, which critics argue are a betrayal of the Pentagon's Kurdish partners in the fight against ISIS there.

Uh, everything's perfectly all right now. We're fine. We're all fine here, now, thank you. How are you?