'I am fully confident that the president …will not give us an illegal order. As I said, the United States military will – as it always has – obey the laws of armed conflict' 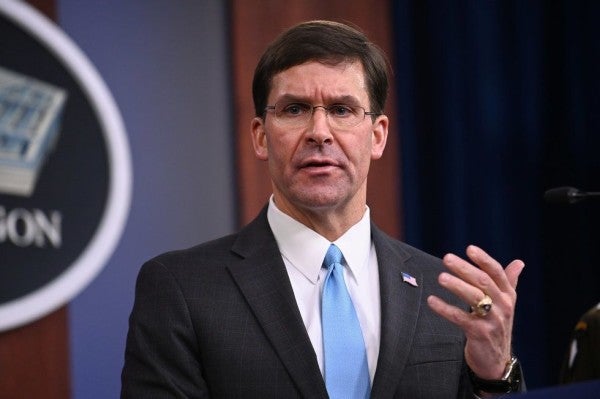 Defense Secretary Mark Esper is counting on President Donald Trump not to order the U.S. military to commit war crimes in response to any Iranian attacks in the near future.

Following the U.S. airstrike that killed Iranian Maj. Gen. Qasem Soleimani, Trump warned Iran that the United States would attack targets that are important to Iranian culture if Iran retaliated.

CNN's Barbara Starr asked Esper during a news conference at the Pentagon on Tuesday if he would resign should the president order U.S. military strikes against Iranian cultural sites, which would violate various international agreements on warfare.

“I am fully confident that the president … will not give us an illegal order,” Esper replied. “As I said, the United States military will – as it always has – obey the laws of armed conflict”

Trump tweeted on Jan. 4 that should Iran retaliate for Soleimani's killing, the U.S. military would attack 52 targets that would include “some at a very high level & important to Iran & the Iranian culture.”

But on Tuesday, the president appeared to indicate he agreed that the U.S. military should live up to its obligations under international laws when he was asked if any Iranian cultural sites are would be on any future target list.

“And you know what? It if that's what the law is – I like to obey the law,” he continued. “But think of it: They kill our people. They blow up our people and then we have to be very gentle with their cultural institutions. But I'm OK with it. It's OK with me.”

In his Jan. 4 tweet, Trump made clear that the number of targets that would be struck in response to any Iranian retaliation is symbolic: the number 52 represents the same number of Americans whom the Iranians held prisoner for more than a year after capturing the U.S. embassy in Tehran in 1979.

Paul Lewis is one of those former hostages. A Marine sergeant in 1979, he arrived at the Tehran embassy as a Marine security guard about 14 hours before it was overrun.

Lewis said on Tuesday that he is mostly indifferent to Trump evoking the Iran hostage crisis when threatening to attack Iran.

“You know, we've been ignored by four administrations,” Lewis told Task & Purpose in an interview. “So I guess, maybe, it's a positive is actually old enough to know that we were there and it happened. The symbolism, I'm really non-pulsed. It's something I noticed, shrugged off and continued my day.”

However, Lewis supports the president's decision to kill Soleimani, which he believes may have taught the Iranians a lesson about the consequences of crossing a red line.

“My attitude my entire adult life has been if you kill an American you should never feel safe again,” said Lewis, whose brother-in-law was one of the Marines killed in the 1983 Beirut barracks bombing. “I'm not so worried about the retaliation. I think the Iranians are very rational, and I think it got their attention. So I'm not worried about World War III starting there. They're not lunatics.”