President Trump said Iran would be held responsible for lives lost or damage incurred at the U.S. Embassy in Baghdad... 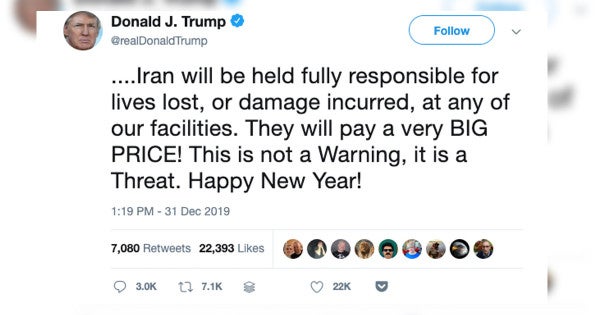 President Trump said Iran would be held responsible for lives lost or damage incurred at the U.S. Embassy in Baghdad before wishing everyone a happy new year in a pair of tweets on Tuesday.

“The U.S. Embassy in Iraq is, & has been for hours, SAFE! Many of our great Warfighters, together with the most lethal military equipment in the world, was immediately rushed to the site. Thank you to the President & Prime Minister of Iraq for their rapid response upon request,” Trump wrote on Twitter.

“Iran will be held fully responsible for lives lost, or damage incurred, at any of our facilities. They will pay a very BIG PRICE! This is not a Warning, it is a Threat. Happy New Year!”

The tweets were followed with Trump tweeting, “The Anti-Bengahzi!” The tweet was deleted and then resent with the correct spelling a short time later.

About 100 U.S. Marines were being sent to the embassy to provide additional security after Iranian-backed militia fighters and Iraqi protesters tried to storm the compound. The attack on the Baghdad embassy came after U.S. airstrikes hit an Iranian proxy force believed to be behind a rocket attack in Kirkuk that killed an American contractor and injured several service members.

Several videos of the scene showed crowds chanting “Death to America!” while others sprayed graffiti on the compound's walls.