Iran launches ballistic missiles at US military bases in Iraq

Iran launched more than a dozen ballistic missiles at U.S. and coalition personnel in Iraq early Wednesday morning, according to... 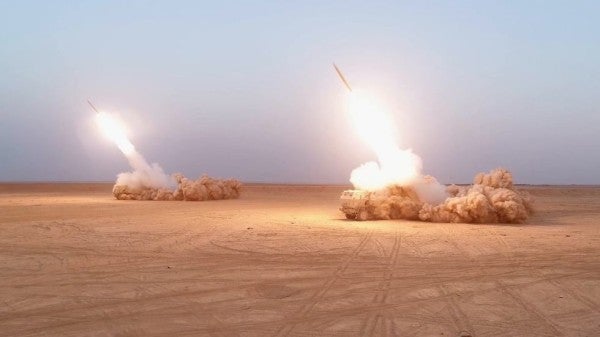 Iran launched more than a dozen ballistic missiles at U.S. and coalition personnel in Iraq early Wednesday morning, according to the Pentagon's top spokesman.

“It is clear that these missiles were launched from Iran and targeted at least two Iraqi military bases hosting U.S. military and coalition personnel at Al-Assad and Irbil,” Jonathan Hoffman said in a statement. “We are working on initial battle damage assessments.”

“In recent days and in response to Iranian threats and actions, the Department of Defense has taken all appropriate measures to safeguard our personnel and partners,” Hoffman added.

“These bases have been on high alert due to indications that the Iranian regime planned to attack our forces and interests in the region. As we evaluate the situation and our response, we will take all necessary measures to protect and defend U.S. personnel, partners, and allies in the region.”

President Donald Trump, who met with his national security advisors on Tuesday night, tweeted that “all is well” following the missile attacks and he would issue a statement on Wednesday morning.

“So far, so good!” the president tweeted. “We have the most powerful and well equipped military anywhere in the world, by far!”

All is well! Missiles launched from Iran at two military bases located in Iraq. Assessment of casualties & damages taking place now. So far, so good! We have the most powerful and well equipped military anywhere in the world, by far! I will be making a statement tomorrow morning.

A defense official had no information on whether any U.S. troops had been killed or wounded in the missile attacks. The extent of damage caused by the attacks was not immediately clear.

The official declined to say whether the Iranian attack was an act of war.

Fox News reported that the Iranians fired a total of 15 missiles at the two Iraqi that host U.S. and coalition troops. Ten missiles struck Al-Assad Air Base, one hit Irbil, and four missiles failed.The extent of damage was not yet clear, nor was there any information on possible casualties.

The attack on Al-Assad and other bases, which house both Iraqi and American troops, came days after President Donald Trump ordered the killing of Maj. Gen. Qasem Soleimani, the head of the IRGC's elite Quds Force, as he was leaving the Baghdad International Airport on Jan. 2.

Iran has a “substantial inventory” of short and medium-range ballistic missiles that can hit targets about 125 miles away from its borders, according to the Defense Intelligence Agency.

“The brave soldiers of IRGC's aerospace unit have launched a successful attack with tens of ballistic missiles on Al Assad military base in the name of martyr Gen. Qasem Soleimani,” the Islamic Revolutionary Guard Corps said in a statement.

This is a breaking news story. It will be updated.