The Navy and U.S. Special Operations Command conducted a first-of-its-kind exercise last week: tasking the beloved AC-130 gunship to seek out and destroy small surface threats in the Arabian Sea. 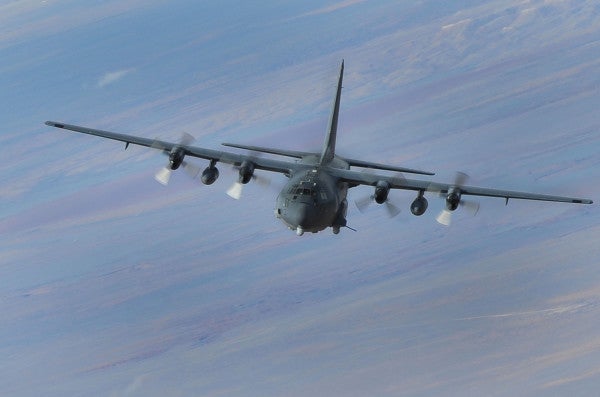 The Navy and U.S. Special Operations Command conducted a first-of-its-kind exercise last week: tasking the beloved AC-130 gunship to seek out and destroy small surface threats in the Arabian Sea.

With the aircraft overhead, the Navy tasked several Cyclone-class patrol coastal ships to simulate surface targets for the AC-130Ws to engage.

“Our surface forces integrating with aircraft that have the firepower of an AC-130W brings a capability to the joint force that profoundly enhances our lethality in the maritime environment,” Destroyer Squadron (DESRON) 50 commander Capt. Peter Mirisola said in a statement.

“The addition of the Gunship to the joint maritime battle significantly enhances our ability to detect, track, engage and defeat surface threats in order to control water space in the Arabian Gulf.”

While Mirisola didn't say so explicitly, the surface threat he referred to is clearly a reference to Iranian forces and Iranian-backed militias who have threatened oil tankers in the region in recent months (NAVCENT did not immediately respond to request for comment).

Indeed, the exercise came days after the Saudi Arabian claimed it had foiled an “imminent terrorist attack” on an oil tanker by remotely controlled vessels laden with explosives off the coast of Yemen in the Arabian Sea that, according to Al Jazeera, was purportedly perpetrated by Yemen's Iranian-backed Houthi rebels.

Although the NAVCENT release doesn't make overt reference to Iran, it did compare the integration of U.S. special operations forces assets in maritime operations to the use of MH-6M Little Bird helicopters during Operation Earnest Will in the 1980s.

Taking place during the Iran-Iraq War, Operation Earnest Will saw the U.S. military conduct maritime security operations from 1987 to 1988 to protect Kuwaiti-owned oil tankers from attacks from Iranian boats, part of the so-called 'Tanker War' phase of the conflict.

“We’ve effectively employed similar joint capabilities in the past to counter belligerent forces that attempt to disrupt or hinder the free flow of commerce and freedom of navigation in this region using force, or attack U.S., coalition, or partner forces in a conflict,” NAVCENT command Vice Adm. Jim Malloy said in a statement.

“We will continue to work across component commands and coalition partners to further improve the lethality of our forces through our ability to simultaneously engage a multitude of threats in the Arabian Gulf, Red Sea and adjacent waters.”

Concern over tanker attacks has grown since June 2019, when U.S. Central Command released video it claimed implicated Iran's Islamic Revolutionary Guard Corps (IRGC) in the attack on two oil tankers in the Gulf of Oman.

According to CENTCOM commander Marine Gen. Gen. Kenneth “Frank” McKenzie Jr., U.S. troops across the Middle East have been bracing for additional proxy attacks in the months since a U.S. drone strike took out Iranian Maj. Gen. Qasem Soleimani, the leader of the IRGC's elite Quds force.

“They're under greater pressure, and entities under great pressure can react very aggressively,” McKenzie recently sailors in the Arabian Sea of Iran, the Washington Post reports.

“We believe that this is going to have an effect on deterring future strikes of this nature,” McKenzie Jr. had told reporters on Friday. “We've seen in the past what happens when you don't respond. Now people know that we're not going to tolerate these direct attacks on American or coalition service members, and we're willing and able to respond.”

WATCH NEXT: Why the Apache is the ultimate attack helicopter