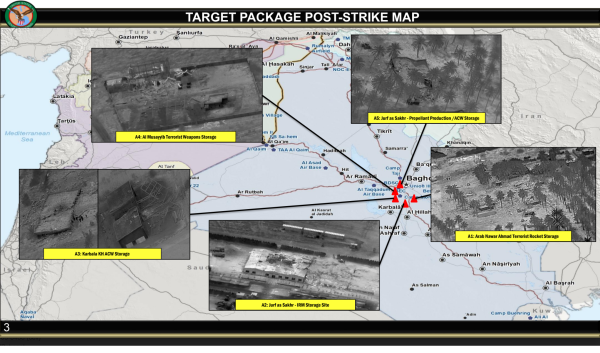 The U.S. military is consolidating its footprint in Iraq by moving troops off of smaller bases, a defense official confirmed.

The troop movements have been planned for several months, said Marine Capt. Matthew “Tex” Morris, a spokesman for the U.S.-led mission in Iraq and Syria.

Morris did not say which bases that U.S. troops are leaving, but the top U.S. military spokesman in Iraq tweeted on Tuesday that all U.S. and coalition troops will depart a base at al-Qaim near the Syrian border.

NBC News correspondent Courtney Kube first reported that hundreds of U.S. troops will be part of the move, which also involves leaving Qayyarah Airfield West near Mosul and K-1 Air Base in Kirkuk.

The troops leaving the three bases will be moved to larger installations in Iraq, Syria, and Kuwait, Washington Post reporter Louisa Loveluck revealed.

Officially, the repositioning of U.S. troops in Iraq is “a result of the success of Iraqi Security Forces in their fight against ISIS,” Morris told Task & Purpose.

However, the change comes after a March 11 rocket attack on Camp Taji killed two U.S. troops and a British service member, prompting the U.S. military to launch air strikes against Kata’ib Hezbollah, an Iranian-backed militia in Iraq.

Those airstrikes failed to prevent another rocket attack on Camp Taji on March 14, which wounded three U.S. service members.

A defense official told Task & Purpose on Tuesday that the movements had been planned for a long time and are not a response to Kata’ib Hezbollah.

Tensions between the United States and Iran have been on a slow boil since January, when the U.S. military killed former Kata’ib Hezbollah commander Abu Mahdi al-Muhandis and his ally Iranian Maj. Gen. Qasem Soleimani, former head of the Islamic Revolutionary Guards Corps' elite Quds Force.

Iran retaliated for the killings by launching a ballistic missile attack on two Iraqi bases that host U.S. and other collation troops. At least 110 U.S. service members at Al-Asad Air Base in Iraq were diagnosed with mild traumatic brain injury as a result of the Jan. 8 missile attack.

“I still think they are actively seeking ways to achieve destabilization that would allow them to escape the strictures of the maximum pressure campaign,” McKenzie said during a March 13 Pentagon news briefing.

“In authoritarian states they can react to an internal crisis by one of two ways: They can turn inward or they can turn outward,” McKenzie said. “History typically tells us authoritarian states turn outward in order to martial the people behind them against a common foe external, either manufactured or real. So I think it's very possible that that's what we're seeing right now.”