US to deploy 3,500 paratroopers to the Middle East in response to threats of retaliation from Iran 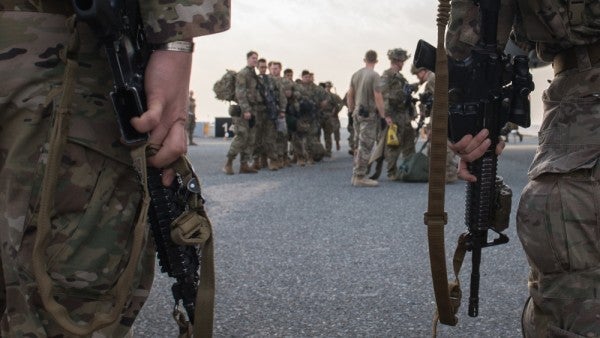 The deployment comes in response to threats of retaliation from Iran for the killing of top military commander Qassim Suleimani in an American air strike on Thursday night.

The killing of Suleimani marks a dramatic escalation of the “shadow war” between Iran and the United States that hit a boiling point last week when pro-Iranian militiamen attacked the U.S. Embassy in Iraq following an American air strike on the Iran-backed Kataib Hezbollah militia.

U.S. Marines landed in the embassy on New Years Eve to deter protestors and militiamen while 750 paratroopers from the 1st Brigade Combat Team, 82nd Airborne Division deployed to Kuwait on standby in case further help was needed.

The new deployment will include the rest of the 1st BCT, or roughly 3,500 soldiers, according to Military Times, which reports that the majority of the paratroopers “will act as a response force to regional threats.”

“The brigade will deploy to Kuwait as an appropriate and precautionary action in response to increased threat levels against U.S. personnel and facilities, and will assist in reconstituting the reserve,” a Defense Department spokesman told Task & Purpose.

The United States has already dispatched about 14,000 additional troops to the Middle East since May, Reuters reports.

Reports of the deployment came shortly after Secretary of State Mike Pompeo declared the world “a much safer place” following Suleimani's death.

“I can assure you that Americans in the region are much safer today after the demise ,” Pompeo told reporters on Friday.

Iranian leaders appeared to disagree. Al Jazeera reported that Ismail Qaani, Suleimani's successor as chief of Iran's elite Quds Force, stated that “soon will witness the bodies of Americans in all of the Middle East.”

The U.S. military presence across the CENTCOM region is massive, but it wasn't clear early Friday afternoon what other branches of the military were doing to prepare for possible retaliation from Iran. The U.S. Navy's 5th Fleet, for example, is based in Bahrain, which has a significant Shiite population and a Hezbollah presence.

A 5th Fleet spokesman declined to comment on specific plans in place for preparing for possible Iran threats.

“We remain vigilant to assess threats and are monitoring developments in the region closely, ” wrote Cmdr. Joshua Frey to Task & Purpose. “In concert with our Bahraini hosts, we maintain robust capability to defend ourselves. We do not discuss specific force protection measures.”