"We are ready and able to respond to any aggression directed at Americans or our interests." 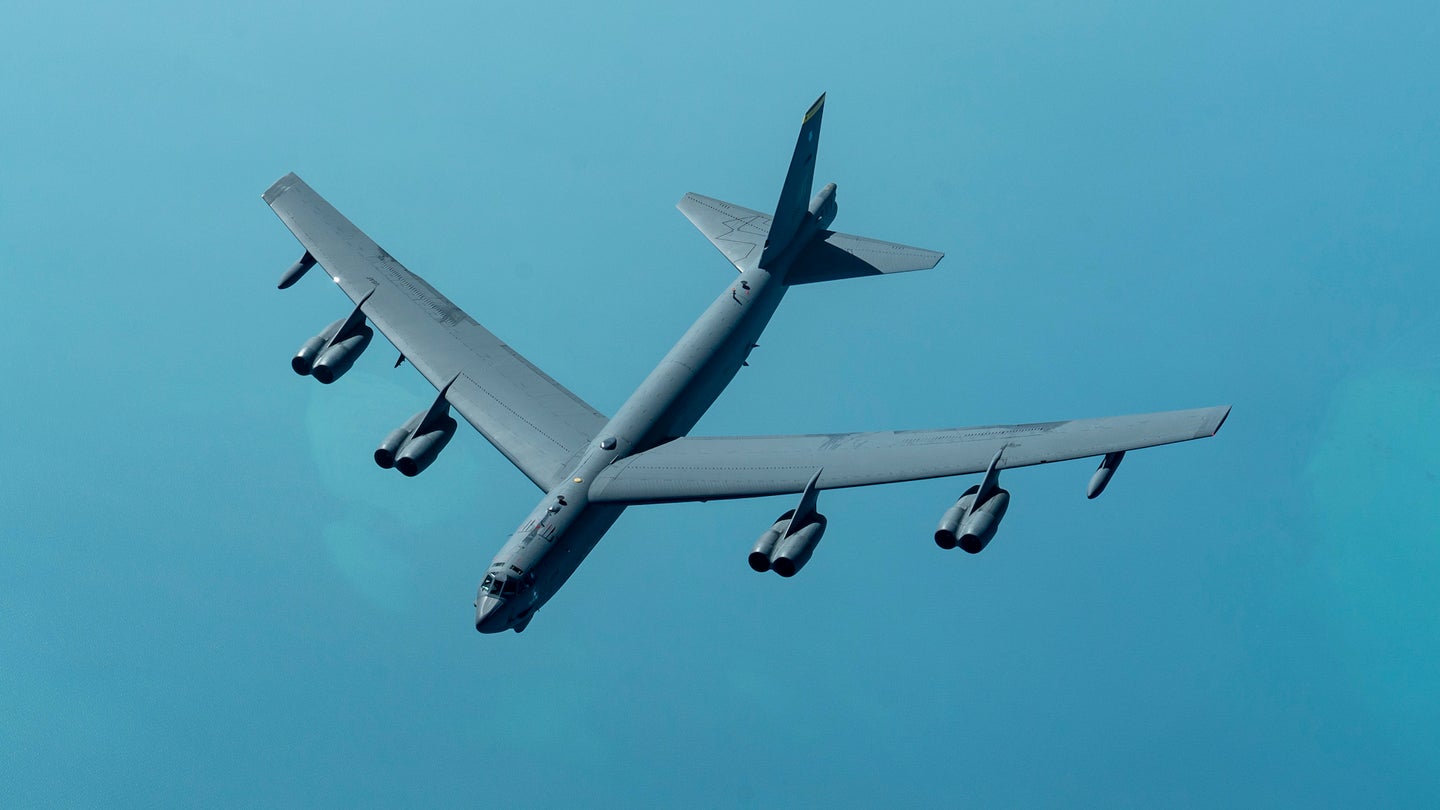 A U.S. Air Force B-52 Stratofortress from Minot Air Force Base, N.D. approaches a KC-135 Stratotanker before an aerial refueling mission over the U.S. Central Command area of responsibility Dec. 30, 2020. The deployment underscores the U.S. military's commitment to regional security and demonstrates a unique ability to rapidly deploy overwhelming combat power on short notice. The B-52 “Stratofortress” is a long-range, heavy bomber that is capable of flying at high subsonic speeds at altitudes of up to 50,000 feet and provides the United States with immediate nuclear and conventional global strike capability. (U.S. Air Force photo by Senior Airman Roslyn Ward).
SHARE

Two Air Force B-52s from Minot Air Force Base, North Dakota flew over the Middle East on Wednesday, according to the Air Force, marking the latest show of strength meant to intimidate Iran and flex American muscle in the region.

B-52s had previously flown similar short-notice, long-range missions from Louisiana and North Dakota to the Middle East on Dec. 10 and Nov. 21, respectively.

The announcement comes in the middle of a build-up of force and tension in the region. On Dec. 21, Iran-backed militias launched rockets into an area housing the U.S. Embassy in Baghdad, killing at least one civilian and damaging the embassy compound, NPR reported.

The U.S. government had previously moved to withdraw some staff from its Baghdad embassy as the one-year anniversary of the Jan. 3 killing of Iranian Maj Gen. Qasem Soleimani approaches, The Washington Post reported.

The new events also come a month after Mohsen Fakhrizadeh, the senior Iranian scientist who founded the country’s military nuclear program was reportedly killed by a remote-controlled machine gun.

Also earlier this month, the U.S. sent an Ohio-class guided-missile submarine, the USS Georgia, through the nearby Strait of Hormuz, the first appearance of an Ohio-class sub in that body of water in eight years, as a clear signal to Iran, The War Zone reported.

“The United States continues to deploy combat-ready capabilities into the U.S. Central Command area of responsibility to deter any potential adversary, and make clear that we are ready and able to respond to any aggression directed at Americans or our interests,” said Gen. Frank McKenzie, head of U.S. Central Command, in a press release about Wednesday’s mission.

“We do not seek conflict, but no one should underestimate our ability to defend our forces or to act decisively in response to any attack.”

The Minot ‘BUFFs,’ as B-52s are sometimes called, have had a busy month. On Dec. 4, a B-52 from the 5th Bomb Wing flew all the way from North Dakota to the Barents Sea, located off the coasts of Norway and Russia, and back in a show of the broad reach of U.S. strategic bombers.

Though the mission was meant to involve two B-52s, one had to divert to Royal Air Force Fairford in England, due to a maintenance issue, the public affairs office for U.S. European Command wrote in a press release.

Related: ‘Unsafe’ intercept of a B-52 over the Black Sea is the latest example of the Russians being jerks