Homeless Veterans Work For A Living

In March of last year, I began a journey. I decided to gather all possessions I had, tents, survival gear,... 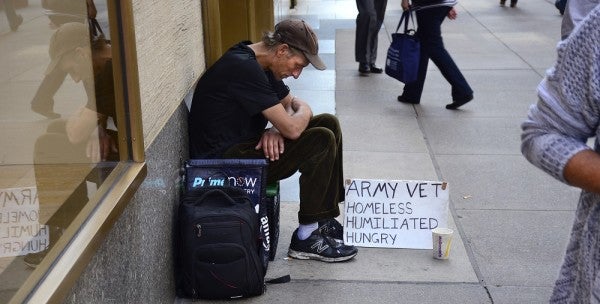 In March of last year, I began a journey. I decided to gather all possessions I had, tents, survival gear, first aid, cram them into a tiny car and drive the country in an effort to seek out homeless veterans in need. I managed to cover 33 states in 9 months, feeding and clothing over 150 homeless veterans—and, sadly, nearly 350 homeless families.

It wasn’t difficult to find them. Every state across the country has a Walmart within 50 miles of one another. I saw, sometimes two at a time, military brethren, keeping each other company inside their cars. Spending one or two nights, living out of my car, I began to notice their pattern. No matter the time zone, like clockwork and undoubtedly chalked up to their training, at 5 AM a small caravan of workers would turn over their car or truck engines and head out of the parking lot and onto whatever construction or under the table part-time work they could find. They would all come back to the parking lots around 5 PM in the evening, get out of their vehicles, clothes dirty and tattered, and walk into Walmart to come back out with some small food portions and possibly bathroom supplies.

Some, it was apparent, wished to be left alone, among their thoughts and saddened gaze out into nowhere. Others would welcome me as I would always set up a camping stove and some chairs, the likes would typically be seen at a football game tailgate party. Just my dog and I, stew or corned beef hash, cooking. These men and women would approach and before ever requesting anything, would offer anything they had as if there were an unspoken etiquette of trade mandated prior to any sharing of company.

Immediately we would strike up conversation about how they became impoverished and in their own words, “desolate and abandoned.”

They would say, “It’s just impossible. I went overseas for my country and now I can’t even afford hot water in a home nor a home to begin with. I had a home but lost it. I couldn’t keep up with the bills. And I’ll be damned if I take a handout. That’s not how I was raised or trained.”

The conversations became repetitive. These men and women were not drunk, on drugs or mentally ill. They simply could not keep up with the cost of living after their service ended. In five instances, this feeling of failure brought men to the point of wanting to end it all. “No one will care if I’m gone. Nothing I’ve done matters. It doesn’t matter if I die unless it happens over there.” I spent hours trying to convince them otherwise, I hope with a long-term effect. These men and women that served feel left behind and unwanted. They feel actions speak louder than words. This country does far more talking than acting, unfortunately.

David Clayton-Ready drafted the “Character by Integrity Act” and is eager to speak to any congressional representative or staffer who cares about the epidemic of homeless veterans sweeping the nation. You can learn more about the act Integrity Act here. You can support his work here. You can see all of the travels of David and his faithful companion, Boomer, on his Instagram account found on the profile name of: Honest_Irish. He has written a manuscript about his year's journey through the world of the Walmart vets, and would welcome assistance from a freelance editor who could edit and format it so it could be sold as an e-book on Amazon.