Wanted: DNA From Veterans Who Served In South Korea

At 68, retired Army Capt. Walter Rettberg thought he was done having children. Then he decided to trace his family... 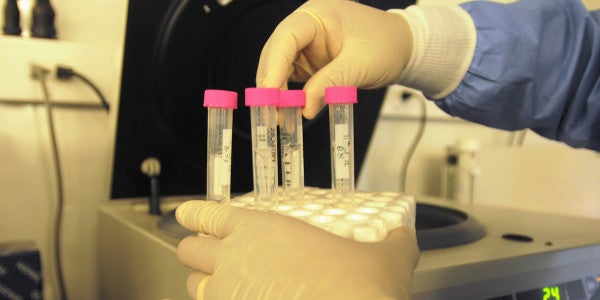 At 68, retired Army Capt. Walter Rettberg thought he was done having children. Then he decided to trace his family tree with a DNA-testing kit and found Matthew.

Matthew Suh was a baby in South Korea when he was adopted nearly 40 years ago by an American couple. He grew up longing to find his biological mother but never thought about searching for his father because it seemed an impossible task.

All he knew was that his father had been an American soldier serving in South Korea.

In many cases, troops rotating through the country didn’t know the women they had sex with became pregnant, so the group is offering free DNA kits to all vets and their descendants.

“So many of them have been stationed here for a long time,” said Maria Savage, director of the group’s South Korea operation that launched this year. “So if they remember any encounters that they had then that’s enough for us.”

The DNA will help even if the vets didn’t father children, because it might lead to another relative who did, she said.

Suh heard about the program and decided to give it a try.

“I didn’t think anything would happen, but I said what do I have to lose?” he said during a recent interview in Seoul.

The baby’s mother never gave him her full name, so a nun at the orphanage listed hers on the adoption papers — Suh.

He became Matthew Scherer upon arriving at his new home in Fort Benning, Ga., but he grew estranged from his adopted parents after they had children of their own and left him feeling neglected.

At 24 he applied for a passport only to be told he wasn’t a U.S. citizen. His parents never filed the paperwork to apply for citizenship, which was not granted automatically as part of the adoption process until 2000.

The new Child Citizenship Act was not retroactive so Suh, who was an adult when it was passed by Congress, did not benefit from it. That meant he was still South Korean according to the law.

“All my life I always felt all-American. That’s the only life I knew,” he said. “I was devastated to discover that I’m not a citizen.”

He spent years fighting his status and finally got a green card only to be told it would be another half-decade or more before he could get actual citizenship. So he obtained a South Korean passport and flew to his birth country in 2010.

“I didn’t want to wait until I’m an old man to travel. And the time was already running out for me to try to find my mother,” who was born in 1936, he said.

His search only brought more pain. Suh’s birth mother died before he could meet her, and he said the uncles he did find wanted nothing to do with him. He learned about his mother’s funeral after the fact.

Meanwhile, he was stranded in a country that gave him citizenship but was not home. He now goes by his original name.

Suh didn’t speak Korean but couldn’t take advantage of the free language courses and other benefits usually enjoyed by returning adoptees because he was considered a citizen, not a visitor.

He found work as an English teacher and decided to start his own family. He got married and had a baby girl named Sophia.

Then, in August 2016, he received a DNA kit from 325 Kamra, swabbed his cheek and waited. More than a year later, the phone rang.

Like millions of other Americans, Rettberg had randomly submitted his DNA to Ancestry.com in August, hoping to learn more about his European background.

“I was looking for somebody from Germany to say that they were looking for me and I had a long-lost castle or something,” he said in a recent telephone interview. “Instead I got Matthew.”

It was the first direct match for a father at 325Kamra, which was founded by a group of adoptees in 2015. The organization has made 41 matches; however, most were via siblings or cousins.

Rettberg, who married another South Korean woman and has two children 29 and 26, was skeptical and suspected fraud when he got the call about the match Nov. 1.

“You get so many emails that might not be real — usually wanting money — so naturally I’m leery about things like that,” he said.

That was compounded by an initial error in dates. But after those were corrected and he saw similarities in pictures shown to him of Suh, he let down his guard.

The final straw was the mention of Uijeongbu, the area near North Korea where he had been based at Camp Stanley.

“Everything fell into place. When they mentioned Uijeongbu, then I knew,” he said.

Rettberg only vaguely remembers the night in 1977 when Suh would have been conceived with a local woman he met at the base’s Enlisted Club.

“It was just a one-time thing. She didn’t seem to want to pursue it further and the next morning we just went our separate ways,” he said. “That’s kind of how it was in Korea back then. It was kind of wild and loose.”

He was transferred back to the United States soon after and never knew she was pregnant.

After getting permission, 325 Kamra passed on contact information to both men. Suh was happy but also nervous that he would be rejected again.

“In the back of my mind I thought if I did ever find my father it’s possible that he’d be married and wouldn’t want his wife to know about it. You know how the military is,” he said.

Rettberg made the first move.

Suh then called him and they talked for nearly six hours. He also has talked to his new sister, although his brother is busy with Marine boot camp so they haven’t had time to connect.

They now speak regularly on Skype. Rettberg, who lives in Norfolk, Va., is talking to immigration attorneys to help Suh get U.S. citizenship.

Suh’s case has many complications and hurdles; Rettberg hopes his new family members will at least visit next year.

“The thing is that he should’ve been granted citizenship as an adoptee,” Rettberg said. “He’s almost like a man without a country because he doesn’t belong to Korea.”

More than 110,000 Koreans have been adopted by Americans since 1958, according to Korea Adoption Services.

Many were the product of a thriving sex industry fueled by U.S. and U.N. troops who flooded the country during the 1950-53 Korean War and remained as a deterrent after it ended in an armistice instead of a peace treaty.

Officially sanctioned prostitution was rampant in so-called camptowns outside the military bases in the 1960s and ’70s.

Katharine Moon, who has extensively studied the period for her book “Sex Among Allies,” said many of the officer clubs also allowed in prostitutes and other women to entertain the troops.

“That’s the time when the U.S. dollar was almighty,” Moon said. “It was very fast and loose … lots of irresponsible behavior by men and women.”

That left a legacy of mixed-race children who were shunned by society and often relinquished to orphanages by their mothers. The stigma was compounded by the fact that South Korean law until 1997-98 allowed only fathers to pass on citizenship, leaving “hundreds of thousands of stateless children,” said Moon, a fellow at the Washington-based Brookings Institution.

“The family members of the women with these children often rejected both the women and the children,” she added.

Helen Noh, a professor at Seoul’s Soongsil University who worked at one of them early in her career, said the practice was so profitable that the agencies would offer incentives for women to give up their children.

“For a long time South Korea had a good reputation as a sending country in the U.S.,” she said during a recent panel discussion. “They made it easy.”

As its economy boomed, South Korea cut back on the practice and has implemented regulations and reforms. Meanwhile, many adoptees — now adults — are returning to South Korea to search for their biological families.

325 Kamra, which is named for the hotel room where the friends first thought up the idea and an acronym for Korean Adoptees Mixed Race Association, is trying to help.

The co-founders were of mixed heritage, but the group’s mission extends to all Korean adoptees.

It seeks to collect DNA, medical histories and genealogical information from potential birth families; to provide kits to adoptees; and to help them reunite.

DNA testing kits are free to all Korean adoptees and every military veteran who served on the divided peninsula or their descendants.

Thomas Park Clement, another mixed-race adoptee who founded a medical device company and wrote the memoir “The Unforgotten War,” donated many of the kits.

325 Kamra, which is also funded by paid memberships and donations, is fighting against time.

One of its biggest challenges is overcoming the lingering stigma that prevents many of the women who gave birth from acknowledging their past.

“A lot of people have new families … and news like that could tear them apart,” Savage said. “We’re trying to focus on having it be a positive experience instead of more shame.”

The effort has been aided by the exploding popularity of over-the-counter DNA testing kits in the U.S. led by Ancestry.com and 23andMe.

AncestryDNA sold about 1.5 million kits from Black Friday to Cyber Monday this year, nearly triple its sales in the same period last year, according to Forbes. It has reached 6 million people who have taken tests and are in the database, the report said.

Bella Siegel-Dalton, 325 Kamra’s data director, said she almost fainted when she saw the results showing a match between Suh and his father.

“I had been working on our methodology of making family trees with his matches to connect him to his biological family, but he didn’t have enough to get him close enough,” she said. “Then magically his father DNA tested.”

She said it’s more common to find siblings because many of the parents have died.

Now that he has found his father, Suh said his desire to gain U.S. citizenship is even more urgent.

“Now that I’ve found him I would like to be near him and to be able to spend time with him. I want that in my life,” he said.

“And now that I have a child, which is his granddaughter, I want her to be close to her grandfather, get to know him. I should have citizenship and that should be her birthright, too.”

How to receive a DNA kit

Veterans who wish to receive a DNA kit may contact 325Kamra vis their website at www.325kamra.org or email the following information to kvets23andme@gmail.com:

If servicemember is unavailable to test, siblings and children may test on their behalf