On Jan. 11, a frustrated President Donald Trump allegedly posed a jarring question to the bipartisan group of lawmakers gathered... 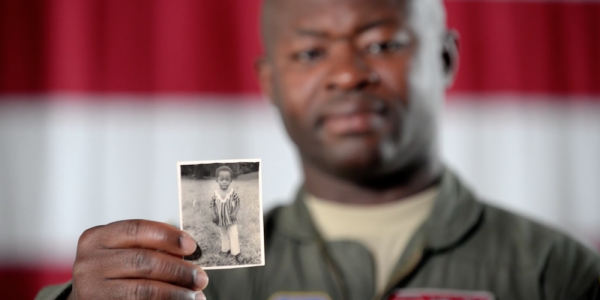 On Jan. 11, a frustrated President Donald Trump allegedly posed a jarring question to the bipartisan group of lawmakers gathered in the Oval Office after their conversation turned to protections for immigrants from Haiti, El Salvador, and African nations: “Why are we having all these people from shithole countries come here?” And after weeks of political furor in the United States and abroad over the comments, the perfect rebuke to the commander-in-chief’s assessment came not from cable news or Congress, but the most senior uniformed officer in the Air Force: They do it because of “hope, hard work, perseverance & patriotism.”

This is Staff Sgt. Eric Piime. He's a boom operator with @121ARW & he's an inspiration. His story began in his native Ghana where he developed a fascination with aviation & an appreciation for the U.S. His is a story of hope, hard work, perseverance & patriotism. #Airpower pic.twitter.com/ZHhXToeZIf

On Jan. 23, Air Force Chief of Staff Gen. David Goldfein spotlighted the story of Staff Sgt. Eric Piime, a boom operator in 121 Air Refueling Wing, Ohio Air National Guard. Piime, a native of Ghana, called the United States a “huge beacon of hope” during his childhood, and after coming to the United States for flight training, he enlisted in the Air Force as “the ultimate way of giving back” to his adopted country.

The best part of Piime’s story is that it’s far more common than most people realize. Immigrants have a long history not of joining the U.S. armed forces simply as a pathway to citizenship, but sacrificing themselves in combat with the lifelong American citizens they fight alongside. Look no further than Pfc. Emmanuel Mensah, the Ghanaian-born New York Army National Guard soldier who lost his life rescuing four people from a deadly inferno in the Bronx in December 2017 just weeks after completing his advanced individual training.

To that end, we’re highlighting seven immigrants who perfectly capture what it means to serve in the United States military.

The Mexican-born Marine who threw himself on a grenade

Sgt. Rafael Peralta, an infantry Marine with 1st Battalion, 3rd Marine Regiment, was posthumously awarded the Navy Cross for his actions during the Second Battle of Fallujah.

Mexico-born Marine Sgt. Rafael Peralta was one of the earliest Corps heroes of the Global War on Terror. After he was shot in the head while clearing a house with his squad during the Second Battle of Fallujah in Iraq in 2004, he used his last breath to throw himself on an enemy grenade and save his fellow infantrymen from certain death. When the Navy commissioned the USS Rafael Peralta at Naval Air Station North Island in San Diego nearly 13 years after his death, Marine Corps. Gen. Robert Neller recalled one of Peralta’s most telling qualities: that he enlisted in the U.S. armed force the day he received his green card.

“This is more than just another commissioning. It marks the commemoration of a life and the immortality of a hero,” Neller said. “Sgt. Peralta’s legacy will forever be part of this ship. All he ever wanted to be was an American, to serve his country.”

Born in a Russian prison, she’s one of the first female infantry Marines

Rct. Maria Daume, Platoon 4001, Papa Company, 4th Recruit Training Battalion, sights in on a simulated enemy during the Crucible Jan. 5, 2017, on Parris Island, S.C. Daume was born in a Russian prison and brought to Long Island, N.Y., at the age of 4 when she and her twin brother were adopted.

Pvt. Maria Daume and her twin brother were born in a prison in Siberia, Russia, where their mother was incarcerated. They lived there for two years until their mother’s death, then landed in a Russian orphanage before their adoption by a Long Island family two years later. In March 2017, Duame became the first female Marine to join the infantry through its traditional training pipeline at the age of 18, joining the Fleet Marine Force as a mortarman.

“I want to fight ISIS,” Daume told Task & Purpose during a January 2017 interview. “Even though everybody in the military fights, I want to be a grunt. I think everything about it is for me, and I want to prove that females can do it.”

Chreim, a vehicle operations dispatch chief with the 386th Expeditionary Logistics Readiness Squadron, left Lebanon with his wife, a U.S. citizen, during the 2006 Lebanon War with Israel, fleeing the country thanks to sailors and Marines from the Navy Iwo Jima Expeditionary Strike Group who spearheaded the largest overseas evacuation of U.S. citizens in history. But it was only after the birth of his first child that Chreim, by then a naturalized citizen, decided to join the Air Force reserve not just to secure his young family’s financial future, but to give back to his adoptive homeland.

“You hold it and you run with it and it’s about how far you can go,” Chreim told the Air Force in April. “That’s what I like about the U.S. It made me want to give back. Part of me wanted to put on that uniform just to say ‘thank you.’”

The airman who enlisted to earn his keep

Staff Sgt. Tamba Benjamin, currently assigned to the 407th Expeditionary Comptroller Squadron, came to the United States when he was 9 years old after fleeing bloody conflicts in his home country of Liberia and Sierra Leone. Though he wanted to join combat troops like Army soldiers or Marines, his brother’s return from Iraq induced him to join the Air Force instead. “Living in another country is like sleeping in someone else’s home,” he told the branch in March 2017. “You take care of the home.”

The soldier who learned English from cartoons

Pfc. Fortytwo Chotper, a unit supply specialist with the 1168th Transportation Company, Iowa Army National Guard based in Perry, Iowa, earned his U.S. citizenship during a ceremony at the U.S. District Court of Southern Iowa in Des Moines, Iowa, on October 6, 2017.

Pfc. Fortytwo Chotper came to the United States from Sudan by way of a refugee camp in Kenya. It took him seven years to make his way to America, a transformation that involved learning English from cartoons and leaving behind his entire family.But shortly after his arrival in Iowa, Chotperfor ended up in the loving hands of the Iowa Army National Guard’s 1168th Transportation Company

“I wasn’t joining to get citizenship,” Chotper told the branch in October 2017. “I was just doing it to give thanks to the United States for bringing me here from the refugee camp.”

His fellow soldiers saw it, too. In early October 2017, members of Chotper’s 1168 TC team and Iowa Air National Guard Chief of Staff Brig. Gen. Randy Greenwood arrived at the U.S. District Courthouse in Des Moines in their dress uniforms to watch Chotper finally take the oath of citizenship. After the ceremony, his brothers-in-arms lifted him on their shoulders, Chopter told the branch: “I feel like I’ve become wholly American.”

The soldier who went from refugee to nurse

1st Lt. Lizamara Bedolla came of age during the Nicaraguan revolution and subsequent Contra War that wracked the country for the entire 1980s. Her early years were defined by the growl of armored troop carriers and sporadic bursts of gunfire beyond her window until her family finally fled to Houston when Bedolla was 4. Now an Army nurse at the William Beaumont Army Medical Center’s Surgical Ward at Fort Bliss, she’s well into a 16-year career that included a deployment with the 10th Combat Support Hospital during the initial invasion of Iraq in 2003.

“(Nursing) has helped me gain much more empathy and sympathy than I thought was possible,” she told the branch in August 2017. “Whatever my idea of empathy was 16 years ago, has completely grown while serving … The Army has taught me a lot about tolerance, self-awareness, patience and has opened my eyes to the different people that are all over this country and abroad.”

He first served the Marines as an interpreter. Now he’ll serve as one himself

Pvt. Mohammad Nadir holds a photo of himself when he was a future Marine at Marine Corps Recruiting Substation Anaheim, June 1, 2017. Nadir graduated from Marine Corps Recruit Depot San Diego on May 26, 2017, and will train to become an infantryman.

Mohammad Nadir’s first interaction with the U.S. military came as an interpreter for U.S. service members at the height of the war in Afghanistan, where he helped soldiers and infantry Marines make inroads with local communities freed from Taliban rule. But nearly seven years later, he’s getting the chance to service as an infantry Marine himself as he wraps up his training at Camp Pendleton San Diego’s School of Infantry West.

“When I saw the Marines fighting I knew I wanted to do that,” Nadir told the branch in June 2017. “They are the brute force for a military and I respect them a lot for what I saw those Marines do in Afghanistan. I told my family I was going to come to America and become a Marine, so I did.”