As Syrians Stand Up, Defense Officials Say US Troops Will Stand Down

Much like with Iraq and Afghanistan, the United States can check out of Syria any time but it can never... 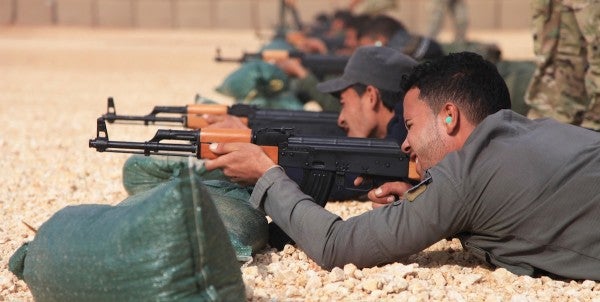 Much like with Iraq and Afghanistan, the United States can check out of Syria any time but it can never fully leave.

The United States will maintain a presence of troops in Syria for the foreseeable future to deter both the Islamic State and Iran, Secretary of State Rex Tillerson said Wednesday.

“Let us be clear: The United States will maintain a military presence in Syria focused on ensuring ISIS cannot reemerge,” Tillerson said during a speech at Stanford University. “Our military mission in Syria will remain conditions based.

“We cannot make the same mistakes that were made in 2011, when a premature departure from Iraq allowed al Qaeda in Iraq to survive and eventually morph into ISIS. It was that vacuum that allowed ISIS and other terrorist organizations to wreak havoc on the country and it gave ISIS a safe have to plan attacks against Americans and our allies. We cannot allow history to repeat itself in Syria.

“ISIS has presently has one foot in the grave. By maintaining an American military presence in Syria until the full and complete defeat of ISIS is achieved, it will soon have two.”

The United States currently has about 2,000 troops in Syria as part of the war against the ISIS, which has been decimated in both Syria and Iraq by the U.S. and its allies on the ground, including Syrian Kurds.

When asked about Tillerson’s Syria comments on Wednesday, a Pentagon spokesman reiterated the United States would maintain a “conditions-based” military presence in Syria to prevent ISIS from reconstituting itself and becoming an insurgency.

The U.S. military’s plan is to transfer security in Syria to local forces over time, Rankine-Galloway said. The process of stabilization includes restoring basic services in territory now free of the ISIS’ control, disposing of mines and unexploded ordnance and ensuring the free distribution of humanitarian aid.

“While the nature of U.S. support to partner forces will adjust as the coalition shifts from major urban combat operations to stabilization tasks, U.S. support will not end until the enduring defeat of ISIS and will be determined by conditions on the ground,” Rankine-Galloway said.

Once again, the U.S. military’s strategy has been cut and pasted from an earlier era. The Defense Department’s language is almost word for word what the U.S. policy toward Iraq was during former President George W. Bush.

From 2003 to 2008, the U.S. government consistently said that U.S. troops would not leave Iraq until conditions on the ground allowed doing so. Only when security had improved significantly during the surge and Sunni awakening movements did the two countries strike an agreement for the U.S. withdrawal at the end of 2011.

“As the Iraqi forces gain experience and the political process advances, we will be able to decrease our troop levels in Iraq without losing our capability to defeat the terrorists,” Bush said in a November 2005 speech. “These decisions about troop levels will be driven by the conditions on the ground in Iraq and the good judgment of our commanders – not by artificial timetables set by politicians in Washington.”