Syrian state media and Iraqi political leaders have accused the U.S.-led coalition fighting ISIS of conducting airstrikes against a Syrian... 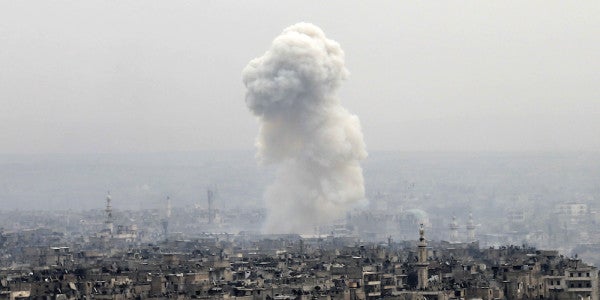 Syrian state media and Iraqi political leaders have accused the U.S.-led coalition fighting ISIS of conducting airstrikes against a Syrian military position in the eastern part of the country, an accusation the U.S. military vehemently denied, the Washington Post reports.

Syrian state TV claimed that the strikes, which hit near the country’s eastern border just after midnight on June 18, were carried out by U.S. aircraft, wounding dozens of Syrian Army soldiers and Iranian-backed Iraqi Popular Mobilization Forces paramilitary fighters deployed to nearby positions at Albu Kamal and At Tanf.

The Iraqi PMF have demanded an explanation from the United States over the airstrikes, but U.S. defense officials have repeatedly stressed that neither U.S. nor allied aircraft attacked PMF or Syrian regime forces.

Related: Air Force Officials Screwed Up Facts About US Aircraft And Weapons Used To Strike Syria »

The U.S. military’s mission to defeat ISIS in Iraq and Syria has not changed, said Pentagon spokesman Eric Pahon.

“U.S. and coalition forces did not strike in the area of Albu Kamal against non-ISIS targets, as the Syrian regime claims,” Pahon told Task & Purpose on Monday. “We want to be very clear that our focus is on ISIS. Our mission has not expanded to include forces other than ISIS. We are concerned about the perception that we conducted this strike, particularly because we want to avoid any possible retaliation against our forces in Iraq or Syria.”

Israeli Prime Minister Benjamin Netanyahu has vowed that his country’s military will “take action” to prevent Iran and its allies from establishing a permanent military presence in Syria, the Washington Examiner reported on June 17.

A spokesman for the Israeli Defense Forces declined to comment on Monday when Task & Purpose asked if the Israelis had launched the airstrikes against the Syrian regime and PMF.

“I’m sure you are familiar with the Israeli policy of not commenting on foreign reports, so I will stick to that policy and I cannot comment on any reports in foreign media,” said Israeli Lt. Col. Jonathan Conricus.

In May, the IDF released video footage of its forces attacking Iranians in Syria following a rocket attack on the Golan Heights, but Conricus said he would be “very surprised” if the Israeli government issued any comment about this matter.

In the meantime, a spokesman for Operation Inherent Resolve issued a statement on Twitter calling the allegation “misinformation.” That’s probably not far off: After all, the only direct military source who described the aircraft as “probably American” was described by Reuters as “a commander in the alliance fighting alongside Damascus …who is not Syrian and spoke on condition of anonymity.” One guess as to where he was actually from, tovarishch.